Riverdance stars in Dublin are living their dream

Lead Irish dancers Amy-Mae Dolan and Jason O’Neill are happy to be home as the Irish dancing phenomenon wow its audiences in Ireland ahead of its 25th anniversary. 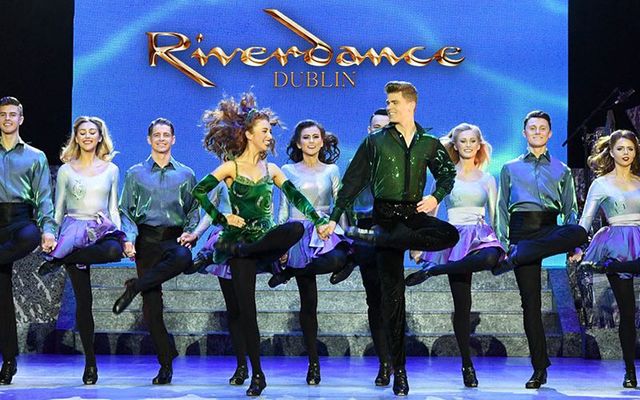 Riverdance, now running at the Gaiety Theatre, in Dublin, is an Irish dancing phenomenon which changed the landscape of Ireland’s traditional dance and ushered in a generation of young dancers who became obsessed with the show. Among them were Jason O’Neill and Amy-May Dolan two of the lead dancers in the Riverdance troupe who spoke to IrishCentral in the VIP room ahead of their performance.

The internationally renowned show has toured throughout 47 countries across 6 continents but for O’Neill and Dolan being part of Riverdance in Dublin is coming home.

Read more: Riverdance triumphantly returns to the stage in Dublin

O’Neill, who’s been with the show for ten years, said “Our families are still at home so when I come home, they get to see what you do and it's so nice to get that kind of validation. They're the roots of why I'm a dancer and when they get to what the show it's special.”

Back in 1994, when Riverdance rocked the world during the Eurovision Song Contest, O’Neill was just six years old and Dolan hadn’t even been born but they both admitted that the Irish dance show became an obsession to them.

Seeing Riverdance in the place where it all began should be on everyone's Ireland bucket list. Riverdance returns for its 16th summer season at Dublin's Gaiety Theatre. Read more here: http://bit.ly/2GrLugx

“I've always listened to the music I've always watched it and so it's just a dream come true to be here,” Dolan said.

“It changed everything,” O’Neill said.

O’Neill, from Belfast, has six sisters and followed, quite literally, in their footsteps in taking up Irish dance. While his sisters ditched Irish dance in their teens O’Neill’s passion grew and in his 20s, on a whim,  he submitted an audition video to Riverdance He went on to audition at the Gaiety and the rest is history.

“The story goes that I was watching in the window, at two years old, and I was dancing along with them. So, I joined the class," Dolan said.

“After that, I just danced every day from the age of two up to now and I would be lost without it. It's everything. It's my whole identity.”

The County Tyrone dancer started out in a week-long Riverdance Summer School after she’d finished high school. A few months later she got the call she'd dreamt of an invitation to join the Riverdance troupe and with that, she was off to China on tour at the age of 18. Within four months she was a lead dancer.

The Riverdance stars work hard, when IrishCentral chatted with O’Neill he was just finishing up a 12-hour day at work. Each of the lead dancers learns every step of the show so that they can rotate at any time. The Riverdance star's motto is “every night is opening night” and their passion and drive shows.

Although it is hard work, the dancers clearly love their jobs. For O’Neill, aside for the showbiz glamor, it’s all about the traveling the international show affords the dancers.

“I've done three or four American tours in a row and I loved it because I've only got one state left to visit, which is Alaska," O'Neill said.

"The fact that I've traveled extensively is a big tick off my checklist.”

For Dolan, her high point of the last couple of years with the show was performing for Pope Francis at Croke Park in Dublin, in August 2018.

“That's probably one of my big moments. It was just amazing. My family were there and there were so many people. It was a great day. There were so many dancers and everyone was so excited. There was just that energy that so hard to replicate. It was amazing.”

That energy and the passion these Irish dancers have is plain when in conversation with them but when they're on stage is when the true Riverdance magic happens.

So, whether you've attended one of the 11,500 performances of Riverdance around the world or still have yet to witness the magic, this season of Riverdance in Dublin is the time to go.