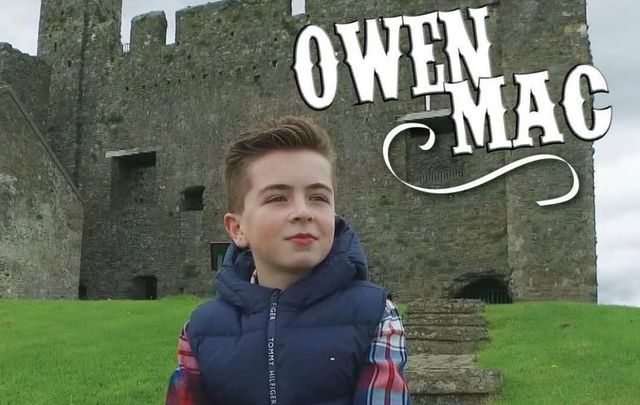 Owen Mac is already known as the next big thing on the Irish country music scene even though he is still just 14 years old.

Adding to the success of his previous viral songs “God’s Plan” and “Especially for You,” young Irish country singer Owen Mac has just released a fantastic new video for his latest song “An Irish Heart”, giving the 14-year-old an incredible catalog for someone barely in their teens.

Described as having the experience of Nathan Carter, the young singer visited the Scenic Carlingford ferry in Co. Louth for his latest music video, offering a stunning backdrop for his sweet voice, as the Co. Derry native performed his own rendition of the Derek Ryan song.

Telling the story of emigration and the love for Ireland that never leaves Ireland’s departed emigrants, “An Irish Heart” is surely a song meant especially for Owen Mac’s legions of American fans.

When we first met Owen Mac in January 2017, he already had a big following on both sides of the Atlantic with 100,000 Facebook likes and his first album under his belt. In less than a year, however, he’s well on his way to becoming an Irish country music star with almost 178,000 likes and a new CD “Heart & Soul” released at the end of last April.

Much of the action in his latest video takes place on the Scenic Carlingford ferry which launched in June 2017 as a water-bound alternative to driving around the lough. Cars can drive onto the ferry, saving yourself 30 miles on the road while allowing you to relax and take in the amazing views.

A Steve Bloor Media Video Production, the video also features bagpipe player Martin Bristow who takes us on a journey through the woods with his music.

Although concentrating on his school work, for the time being, Owen told IrishCentral in a previous interview that he continues to perform across the island of Ireland and we hope we’ll see him in the US soon.

“Singing is going to be my number one goal but I also have said to my parents that I want to get my education as well because you never know what could happen,” Owen told us.

“In that case, I could fall back on my education but at the minute, it's music, music, music and I hope to continue with that.”

Which Owen Mac song is your favorite? Tell us about it in the comments section, below?