Other Voices presents 'Dignity: A Celebration of Bob Dylan at 80' live from Dublin this Monday, May 24 - tune in here! 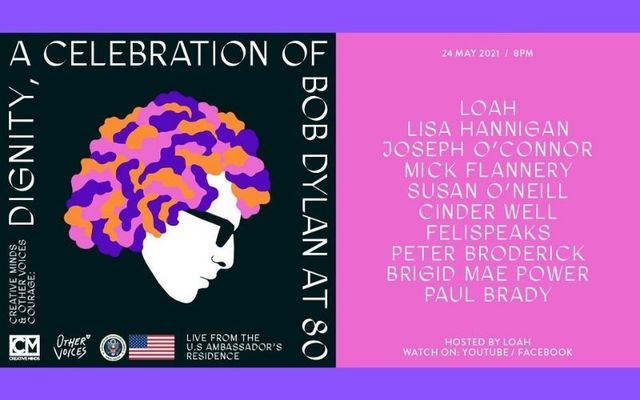 Tune in this Monday, May 24 for a special live stream to celebrate Bob Dylan's 80th birthday from Dublin! Other Voices

Other Voices is bringing together more than a dozen Irish artists to celebrate Bob Dylan’s 80th birthday in a special live stream hosted from the US Ambassador’s Residence in Dublin this Monday, May 24 at 8 pm GMT / 3 pm EST.

Curated by Other Voices and the U.S. Embassy Dublin’s Creative Minds, Dignity will be an evening of songs, poetry, and collaborations in honor of the music and social impact of Bob Dylan on his 80th birthday.

IrishCentral is delighted to again be partnering with Other Voices to bring you this free live stream on Monday, May 24 right here on IrishCentral and over on our IrishCentral Facebook page.

Named for his song ‘Dignity’, Monday's special event will bring together the diverse range of acts to perform songs of Bob Dylan, embracing the power of the music, and introducing an Embassy initiative to promote diversity, inclusion, and equality - themes that weave throughout Dylan’s iconic canon.

“I think of a hero as someone who understands the degree of responsibility that comes with his freedom.” – Bob Dylan

The artists now confirmed for Dignity on May 24 include Lisa Hannigan, one of Ireland's most cherished songwriters; Californian alt-folk act, Cinder Well; FeliSpeaks, the acclaimed Nigerian-Irish poet and performer; the critically acclaimed American experimental musician, Peter Broderick; ethereal Galway-based folk star, Brigid Mae Power; and Paul Brady - one of Ireland’s most enduringly popular artists whose music has been publicly admired by Bob Dylan.

“Bob Dylan has had a profound influence on me and I treasure his words and spirit.” - Brigid Mae Power

“I bless the day when I was 15 and first encountered Bob Dylan’s music.  He is the only songwriter I have listened to every single week since then.” - Joseph O’Connor

These artists will come together to raise their voices in recognition of the legendary musician, songwriter, and activist whose songs and poetry have touched the lives and inspired so many around the world - perhaps nowhere more so than Ireland.

You can get a taste of what to expect from Monday's special live stream in this Spotify playlist:

Christopher Wurst, Acting Deputy Chief of the U.S. Embassy Dublin, says: "The U.S. Embassy is excited not only to work with amazing and diverse Irish artists, to celebrate the legacy of Bob Dylan, but to employ the Dignity project to further highlight issues around diversity and inclusion in both our countries."

Philip King, Other Voices Founder, says: “A self-styled 'musical expeditionary,' The Song and Dance man Bob Dylan set out in the late 1950s and has been traveling hard ever since. His genius was tracked early on. He was always an Other Voice.

"Pete Seeger, the guardian of folk song's eternal flame, asked Bob how he wrote songs: 'Do you just spread out the newspaper in the morning until you find the story that really gets you upset?.'

'I really just take them out of the air," replied Dylan.

“Once described as the performing curator of the museum of American music, Bob Dylan is continuing the journey he started over six decades ago. That he should continue to write, continue to record, continue to perplex and amaze and frustrate and entertain and bewilder and provoke and challenge… is quite simply astonishing.

"I think that Irish people access Dylan at a profound level; we know where he's been, we like to think we know where he's going. Like many of us, he embraces and rejects tradition at one and the same time. The Clancy Brothers and Tommy Makem were living and playing music in the bars and clubs of Greenwich Village at Dylan's dawn. They became, like many others, a source and an influence.

"As he says, 'all I ever wanted was to journey to the place that that song spirit came from.' He's done just that ..and with ‘Dignity’ we gather to celebrate the man and his remarkable work. May he stay Forever Young."

Wise man lookin' in a blade of grass

Young man lookin' in the shadows that pass

Other Voices and Creative Minds will stream Dignity live to the world from the U.S. Ambassador’s Residence, in Dublin’s Phoenix Park, at 8 pm GMT / 3 pm EST on Monday, May 24.

Dignity is supported by the Department of Tourism, Culture, Arts, Gaeltacht, Sport and Media, and the Ardagh Group.

Tune into IrishCentral on Monday, May 24 at 3 pm EST / 8 pm GMT for 'Dignity: A Celebration Bob Dylan at 80' curated by Other Voices and the U.S. Embassy Dublin’s Creative Minds!