Nicolas Cage, who said he once went on a "drinking binge" in Dublin to prep for "Leaving Las Vegas," is reportedly back in Ireland for "Sand and Stones." 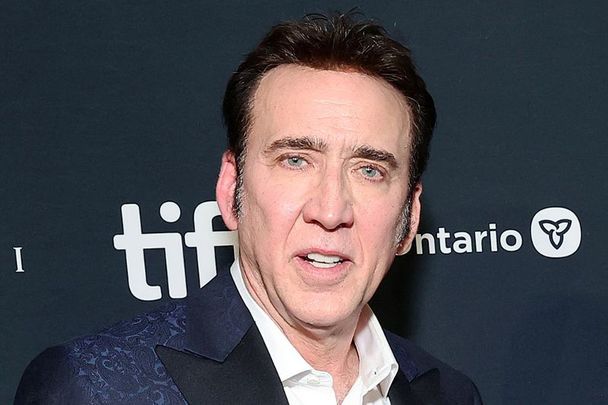 Nicolas Cage is reportedly in Ireland preparing for the filming of “Sand and Stones.”

Cage, 58, stars in the new thriller that was due to begin production in Dublin last month, according to Screen Daily.

The Sunday World now reports that Cage has flown from Los Angeles to Dublin to begin the new project.

Highland Film Group, which is co-financing "Sand and Stones," describes the new movie as such: “In a near future, normal life on Earth has been decimated.

“Paul (Nicolas Cage) and his twin teenage sons, Thomas and Joseph, have been living a half-life – tranquility by day and torment by night. When the sun sets, ferocious creatures of the night awaken and consume all living souls in their path.

“One day, Thomas doesn't return home on time from a visit to his crush, the nearby farm girl, Charlotte. Paul chooses to leave the safety of their fortified farm, risking his life, to find Thomas before the creatures arrive. Just as he finds his boy, a nightmarish battle ensues and Paul is nearly killed by the creatures.

“Back at the house, Joseph is scared and all alone to defend himself against the nightly attack. He succeeds by outsmarting the creatures, even capturing one as he survives the night.

"At dawn, Joseph goes out and finds his brother with their badly injured father. The twins devise a desperate plan for surviving the coming night. Thomas and Joseph together use their courage, ingenuity, and everything their father has taught them to keep him alive.”

Arianne Fraser of Highland Film Group said in November: “We are absolutely thrilled to be working with Nicolas, a superb actor whose worldwide influence and legendary charm is second to none."

As it happens, Cage previously traveled to Dublin for some 'research' for the 1995 film "Leaving Las Vegas," in which he starred as Ben Sanderson, an alcoholic Hollywood screenwriter based on the writer John O'Brien.

Cage revealed in 2000: "I felt that since John was Irish I should go to his home country to try to understand what it was like to be Irish and very, very drunk.

"So I went to Dublin for a two-week drinking binge.

"I had a friend video tape me when I was particularly under the influence so I would be able to examine my behaviour later.

"But I learned a lot on that trip and I remember most of it."

He added: "Naturally, I drank a ferocious amount of Guinness, and a lot of it was in the Shelbourne, where I was staying.

"We'd head out early in the day and hit a few bars around the town, but I really didn't want to be seen in too bad a state.

"You never know who you might bump into, literally, and they might just have a camera with them.

"But that's the beauty of staying in a hotel - you can drink and drink until you fall over and no one need see you.

"I must admit, it was one of the most enjoyable pieces of research I've ever had to do for a part."

The research paid off - in 1996, Cage won the Best Actor Oscar for his role in "Leaving Las Vegas."