Niall Horan has paid tribute to Brazilian football legend Pelé - the two met at a charity soccer event in the UK in 2016. 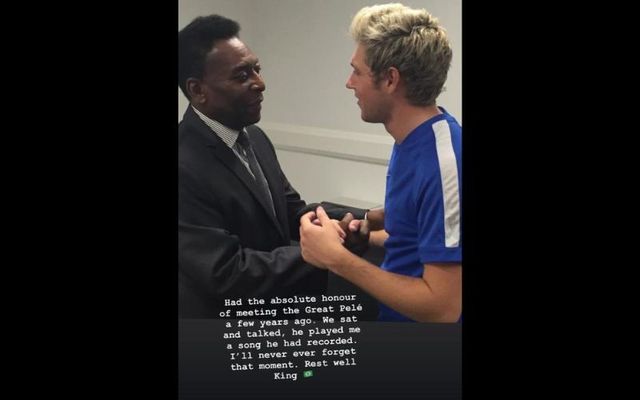 Niall Horan fondly remembered the late soccer megastar Pelé, who died on December 29 at the age of 82.

Horan, an Irish singer-songwriter who shot to fame with One Direction, met Pelé at the Soccer Aid charity event at Old Trafford, home of Manchester United, back in 2016.

"Had the absolute honour of meeting the Great Pelé a few years ago," Horan said in an Instagram story after Pelé's death was announced.

"We sat and talked, he played me a song he had recorded.

A post shared by Soccer Aid for UNICEF (@socceraid)

Horan is big into sports, especially golf, but 2023 seems like his music is going to be the top priority. He’s got a new album on tap and he’s announced a bunch of concert/festival dates in Europe.

The US will undoubtedly get added to the schedule too, especially as Westmeath native Horan's profile will soar when he’s featured on NBC’s "The Voice" every week as one of the upcoming season’s new judges, alongside Kelly Clarkson, Blake Shelton, and Chance the Rapper.

"Ooh, my biggest competition this year is definitely Kelly (Clarkson). We have very similar tastes in music, same kind of taste in voices. Yeah, I think she's going to be a massive threat to me," Horan recently told NBC Insider. "But you never know, I could win the thing.

"I love finding new talent online and things, so I really wanted to get involved and find a new crop of talent that we can nurture and make careers of,” Niall added.

Season 23 of "The Voice" debuts in March.

*This column first appeared in the January 4 edition of the weekly Irish  Voice newspaper, sister publication to IrishCentral.