WATCH: A puppet turkey "disrespected" Niall Horan and his fans are mad

Niall Horan's dedicated fanbase rushed to his defense after they claimed Dustin the Turkey "disrespected" him during his performance on RTE's Comic Relief. 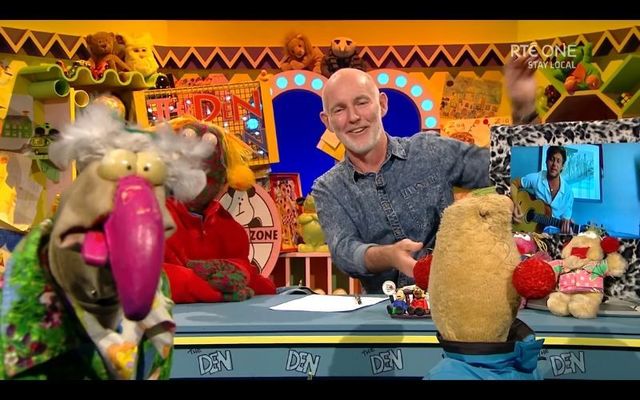 Dustin the Turkey (far left) cut off Niall Horan during a reprisal of 'The Den' on RTE's Comic Relief special. RTÉ, Ireland

Niall Horan's feature on RTE's Comic Relief alongside Ray D'Arcy and Dustin the Turkey last week didn't go over well with some of his non-Irish fans.

For the segment that saw the reprisal of Irish children's program "The Den", Ray D’Arcy, who hosted the throughout most of the 90s, was joined by the puppet characters of Dustin the Turkey and Zig’N’Zag.

Dustin the Turkey, it should be noted, is a beloved character throughout Ireland - he represented the nation during the 2008 Eurovision contest and, yes, even ran for president.  He's been deemed "the most subversive comedy force on Irish television."

It’s true....the old band back together.....it’s gonna be like that time that lot got back together for that thing that everyone loved.....plus one VERY special guest*

*Not Madonna or Mattress Mick https://t.co/ogGpouEOBF

Co Westmeath native Niall Horan, who was previously a member of the worldwide phenomenon One Direction but is now enjoying his own solo career, has been plenty charitable over the past few months since coronavirus came to be, so it’s no surprise he joined in on RTE’s Comic Relief program.

On the show, Horan noted that he used to watch the show but never actually made it onto the program, until now.

Before performing his original song "Black and White," Horan said: “I have a song for ‘Talent on the Telly,’ if you’d like to hear it, then you can judge as harshly as you want."

Check out Niall Horan's performance on The Den for RTE's Comic Relief here:

As Horan sings his tune, D’Arcy, Zig'N'Zag, and Dustin can all be seen bopping along, at least until they cut Niall off and said “We wanted Harry Styles! You’re only getting a minute and a half!”

“I didn’t realize people from Mullingar had teeth,” Dustin the Turkey adds.

While most people watching in Ireland probably got a good laugh out of a turkey puppet slagging poor Nialler, the joke didn’t exactly translate well internationally. (We think it's safe to say that Niall was in on the joke!)

Niall’s dedicated fanbase was displeased, to say the least:

What they did to Niall was extremely disrespectful and rude. He didn’t have to sing for them either and interrupting him saying they wanted Harry instead is so uncalled for. Harry would not singing for your crusty asses anyways! pic.twitter.com/XIQYsdCgyu

Irish humor, however, went into full effect on Twitter:

Niall Horan is in mullingar rn, drinking a pint of milk as his mam serves him a roast unaware that his teenage fans in America are trying to character assassinate ray d'arcy and a puppet

My easily upset American friends, the Irish people are held hostage by this vindictive & kind of abusive turkey. None may challenge the actions/edicts of our avian overlord. I beg you, help free the Irish people from the yoke of Dustin the dictator

To be heckled by Dustin the Turkey is the greatest honour that can be bestowed upon an Irish person. You dishonour him with your protests. Shame on all of you.

Niall Horan is going to have to issue a statement defending Dustin the Turkey from enraged Americans and it won’t even make the 2020 Reeling in the Years episode.

And things calmed down after Dustin the Turkey issued this statement on Sunday:

I 💚 @NiallOfficial
I 💚 Americans
I 💚 The Craic #BeKind

We wait with bated breath to see if Niall or Ray have any final comment.