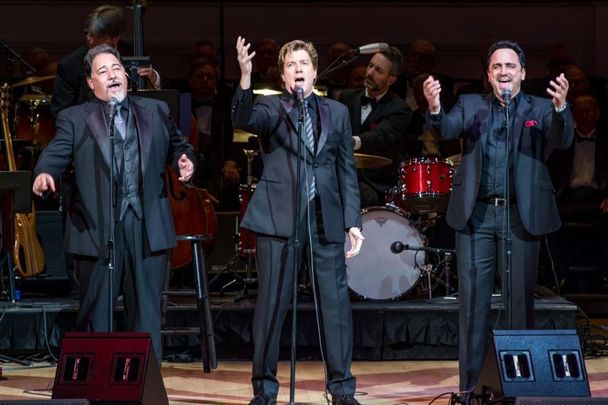 A live stream of The New York Tenors benefit concert will be available from March 12 - 14.

The New York Tenors’ annual Christmas concert in December at Carnegie Hall that benefited Father Francis Pizzarelli and Hope House Ministries was canceled, but the New York Tenors and the Big Apple Band will be coming into homes and giving a first-class concert as they would have at Carnegie Hall starting on Friday, March 12 at 6 pm and going until the 14th at 10 pm.

The H.I.M.S. and Her, a musical group formed at Hope House Ministries, will also perform. The concert will virtually simulcast from the classic Theater at North in Scranton, Pennsylvania, and St. Francis Chapel at Little Portion Friary, Port Jefferson, Long Island.

The New York Tenors are comprised of Andy Cooney, Daniel Rodriguez and Christopher Macchio.  Cooney, christened by The New York Times as “Irish America’s favorite son,” has been taking the Irish American music scene by storm for the last 30 years. His unique tenor voice has been heard in concert halls internationally, including hallmark venues ranging from Dublin’s National Concert Hall to sold-out performances in Carnegie Hall.

Cooney’s show credits also include American Voices, placing him on stage with Grammy Award winners Larry Gatlin and Crystal Gayle in performing arts centers and concert halls throughout the U.S.

Rodriguez first captured the attention of Americans during some of the darkest moments in the nation’s history. He was the New York City police officer whose amazing voice soothed grief in the days following September 11.

His career highlights include performing with Boston Pops Orchestra and debuting before a worldwide audience at the 2002 Winter Olympics in Salt Lake City, Utah.

Macchio is a gifted performer with a voice of exceptional power and beauty. A classically trained tenor from the Manhattan School of Music, this New York native has been wowing audiences by combing his golden-era sound with an engaging stage presence that resonates with people of all ages and backgrounds.

Macchio’s growing reputation has brought him to sold-out theaters and events in the U.S. and Europe. His tenor voice was heard last year from the balcony of the White House at the Republican National Convention.

For the last 40 years, Hope House Ministries led by Pizzarelli has been rebuilding the lives of broken young people fighting drug and alcohol addiction or those who have a criminal record, and the most wounded among us. Hope House also serves poor, homeless, pregnant young women.

Tickets for the virtual show are $25 and available online here.