The Story of Irish Dance: Steps of Freedom is a vividly told history of how Irish dance was expressed on the island going back as far as 2,000 years ago. 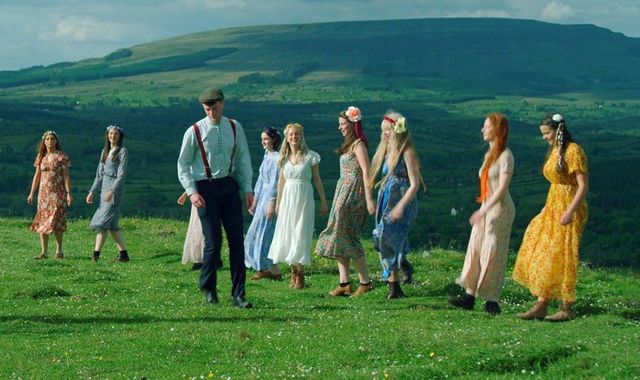 Rince Fada danced atop Leitrim's Hill of the Fairies

Two years ago next week, the advance of Covid-19 around the world managed to stop the phenomenon known as Riverdance in its tracks at Radio City Music Hall in New York City while on its 25th-anniversary tour.

When the curtain fell down midweek of one of its most prestigious engagements since its creation back at the Eurovision debut in 1994 and the ensuing pandemic further put a halt to all public Irish dance activities due to restrictions on gathering for that purpose.

But as we have witnessed, the virtual world became our eyes and ears for creative engagement by artists and storytellers reaching out to us through the video lens to enlighten and entertain us.  And one such video documentary, produced in Ireland during pandemic times, shed light on the world of Irish dance that has been waiting to be told.  The film made its debut on RTE in December and soon will be seen here via PBS.

Ruán Magan, a veteran Dublin filmmaker, director, and producer, had been thinking as far back as seven years ago about how Irish dance had exploded across the world since the emergence of Riverdance, Lord of the Dance, and other mega-dance shows that have spawned dancing schools in as many as 60 countries.  And millions of people have either paid their way to see these shows or have viewed them on television regardless of their national origin.

His videography is called The Story of Irish Dance: Steps of Freedom, and it’s a vividly told history of how Irish dance was expressed on the island going back as far as 2,000 years ago in various accounts up to the present day where so much more is known about it thanks to the aforementioned contemporary shows.

Mixing beautiful scenery and localities that inspired solo and group dancing and dancing masters throughout Ireland’s history in a grassroots environment makes it visually captivating.  The rich array of knowledgeable practitioners teaching or presenting Irish culture offering contextual commentary deftly edited to convey the storyline provides rich and useful insights to further understand the prominence of Irish dance in our cultural heritage.

Along with a valuable timeline and reference points to changes in Irish society and evolution principally from the 18th century onwards through colonialism, the Famine, the Nationalist Movement, independence and the Gaelic League, Catholic Church domination, Immigration waves, and finally, the emergence of a younger more educated population that fueled the Celtic Tiger, we see the continuum of Irish dance that hasn’t been as well articulated before.

While Riverdance-type shows drummed the percussive dance aspect into our consciousness, we learned that the characteristic steps danced to traditional Irish folk music go back much further, particularly in the melting pot of America in the 19th century, especially among Africans and the Irish who were thrown together unwillingly yet managed to develop a creative kinship between Irish step and tap dance.

It is a fascinating and well-told film that will be worth catching over the holiday season this month on PBS outlets.

But as usual, in the month of March, such programming is often saddled with pledge breaks so your attention span will be challenged along with your wallet. Here are the New York area viewing dates and check your local listings: WNJN (New Jersey) March 6 and 12; WLIW (Long Island) March 13, 18 and 19; WNET-13 (New York) March 17, 19, and 20.