President of Ireland Michael D. Higgins earned widespread praise on social media after a moving interview with RTÉ's Late Late Show ahead of his 80th birthday. 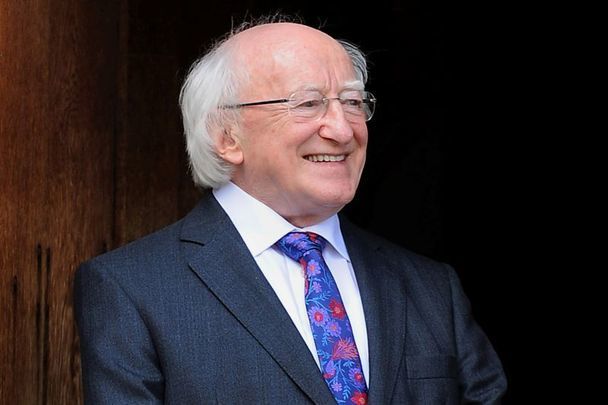 Michael D. Higgins has served as President of Ireland for ten years. Getty

Higgins was talking to RTÉ's Ryan Tubridy on Ireland's Late Late Show on Friday night ahead of his 80th birthday on Sunday and said that what  Sabina brought into his life was "inestimable".

"She changed my life in so many ways and introduced me to such great friends in the theatre and the arts and so on," Higgins told Tubridy in a rare interview at Áras an Uachtaráin.

The couple married in 1974 and have four children together - Alice Mary, twins John and Michael Jr., and Daniel.

Higgins said that he was looking forward to meeting his granddaughter Fiadh for the first time when COVID-19 restrictions are lifted.

"Sabina and I are so looking forward to meeting our grandchild. My son John, and Eva his wife, and Fiadh, our granddaughter they're in Wicklow."

The conversation unsurprisingly turned toward the arrival of Higgins's new puppy Misneach - a Bernese Mountain Dog that has captured the hearts of people on social media.

"He'll be seven months old on May 5th," Higgins said. "He's been nipping but that's a phase that dogs go through and there are ways to deal with it in a kind way."

This will put a smile on your face!

The wonderful @PresidentIRL Michael D. Higgins chats about rock and roll, the park's newest resident Misneach, and the love of his life Sabina. ❤️️#LateLate pic.twitter.com/1Hd0p5CIq3

Higgins earned widespread praise on social media for an honest and "moving" interview that focused on his life before politics. The President also spoke of the oppression of women in Ireland, issues surrounding domestic violence the current state of affairs in Northern Ireland, and Ireland's growing housing crisis.

Late Late Show viewers took to Twitter on Friday night to heap praise on the President for his honesty and compassion.

"Young women going to third-level colleges can’t do so safely and live their lives without suffering violence of a sexual nature' - Micheal D Calling it like it is and asking why isn’t it being tackled," one Twitter user said.

"Happy 80th birthday @PresidentIRL. The interview on the Late Late Show is moving," said another.

"That we should be so lucky to have a president so compassionate and engaged with the issues of today at 80 years of age," said another Twitter user.

That we should be so lucky to have a president so compassionate and engaged with the issues of today at 80 years of age. #LateLateShow