Some Catholics outraged over celebs' Pope-style fashions at Met Gala

Not all Catholics are happy at this year’s theme of “Heavenly Bodies: Fashion and the Catholic Imagination.” 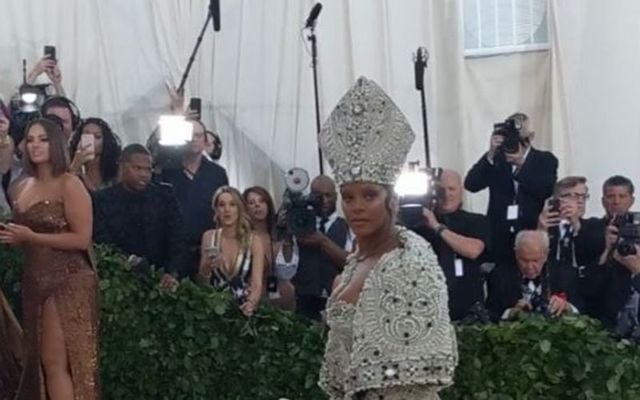 Piers Morgan vents his disgust at the Catholic theme of the 2018 Met Gala.

The first Monday in May marks the iconic Met Gala in New York and while there is annual controversy over whether the celebs managed to hit the nail on the head with the theme, this year’s “Heavenly Bodies: Fashion and the Catholic Imagination” theme has caused controversy all by itself.

British journalist and TV personality Piers Morgan was up in arms on Tuesday morning, berating the fact that Catholicism was chosen as a fashion statement, claiming that the same would not be done for Judaism and Islam.

Despite the Vatican having contributed pieces to the exhibit in the Met’s famous Costume Institute (the exhibit opens May 10), Morgan was less than impressed with likes of Kim Kardashian and Jennifer Lopez appearing at the fundraiser in cross-adorned attire.

Thank you @donatella_versace for designing this stunning dress and thank you to the @versace team! This dress was inspired by the iconic gold chainmail and cross designs from the 1997 Versace couture show & thank you @lorraineschwartz for the beautiful jewels! #Versace #HeavenlyBodies

“Those celebrities who took part in this offensive fiasco need to ask themselves one question: ‘Would I have gone dressed as a Muslim or a Jew if I were not Muslim or Jewish?’” he wrote in the Daily Mail.

“If the obvious answer is 'No, of course not' then they should all be ashamed of themselves.”

*NEW COLUMN*
If the Met Gala was Islam or Jewish-themed, all hell would break loose – so why was it OK for a bunch of flesh-flashing celebrities to disrespect MY religion?https://t.co/aXXTl8P5eE pic.twitter.com/MiLLlJFaSu

One of the fashion highlights of the year, fans waited expectantly to see Rihanna, co-chair of this year’s event, and Blake Lively, in particular, who stole the show in her regal gown.

Here are some of the highlights:

From the Heavens to New York, here are our top picks for best dressed at this year's celestial Met Gala. Which look was your favorite?

What do you make of the Met Gala’s Catholic theme? Let us know your thoughts in the comments section, below.