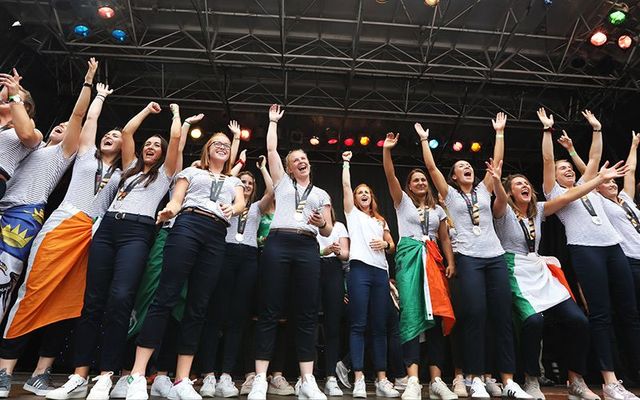 The Irish women's hockey team have been the toast of Ireland every since their meteoric rise to nab the silver medal in the FIH Hockey Women's World Cup, second only in the whole world to the Netherlands. It was the first finals appearance in an Irish field sport.

Read More: These Irish women just made history - and they're not finished yet!

Naturally, they received a heroes' homecoming when they returned to Dublin on August 6. A massive crowd filled Dublin's Dame Street for their first public appearance back home and, as you do, they decided that a song befitting of the occasion was "All I Want for Christmas is You" by Mariah Carey.

Extraordinary scenes in Dublin- all I want for Christmas in August pic.twitter.com/0Um8kIPeql

Well, in case you were wondering, the diva herself positively loves it!

Carey has a strong connection to Ireland. Both of her maternal grandparents immigrated to the US from County Cork, and she's previously said of her mother, Patricia Hickey, "She's so Irish, she loves Ireland, she's like, yay, Ireland! Waving the flag and singing When Irish Eyes Are Smiling. And that's great. I appreciate that and respect it."

So it makes sense that she'd be brimming with pride at this particular cover of one of her most famous songs.

Were you cheering for Ireland in the hockey world finals? Tell us in the comment section below or join the conversation on Facebook.