Lizzo was brought to tears when Sir James Galway, a classically trained Irish flutist, sent her a special Christmas message. 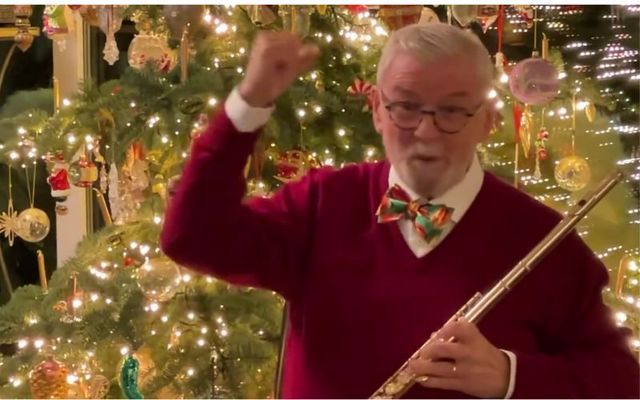 Sir James Galway told Lizzo he is her "number one fan" in a special Christmas message. @lizzo, Twitter

“Merry Christmas, Lizzo, from your number one fan!” Sir James Galway said in a video that Lizzo shared on her Twitter feed on December 25, Christmas Day.

The three-time Grammy winner, who is also a classically trained flutist, described Galway's message as "the greatest gift."

THIS IS THE GREATEST GIFT @sirjamesgalway WISHED *ME* A MERRY CHRISTMAS!! PRICE WENT UP😱 pic.twitter.com/aWQLxl4XWg

She later posted a reaction video showing just how emotional she became after seeing Galway's video:

This wasn’t Galway’s first shout-out to Grammy winner Lizzo. Back in 2020, he tweeted an “Irish greeting” to her:

An Irish greeting to @lizzo from a fan, @sirjamesgalway pic.twitter.com/ZtrirQFZLN

And earlier that year, he wished her the best of luck at the Grammys:

Wishing @lizzo all the best at tonight’s Grammy awards @RecordingAcad - From her fans, Sir James and Lady Jeanne Galway

Who is Sir James Galway?

James Galway was born in Belfast, Northern Ireland in 1939. He began his flute studies in Belfast and at the age of 16, he was awarded a scholarship to the Royal College of Music, followed by studies at the Guildhall School of Music and Paris Conservatoire.

At the age of 21, he embarked on his orchestral career in London’s major opera and symphonic orchestras. He took up the position of solo flautist with the Berlin Philharmonic Orchestra under Herbert von Karajan in 1969, before becoming one of the very first flautists to establish an international solo career in 1975.

He has a vast discography with 98 CDs to his name, having enjoyed recording contracts with Sony Classics and Deutsche Grammophon and most recently the RTE Label, featuring his recording of “Linen and Lace” by Bill Whelan.

He has also collaborated on film soundtracks, such as "The Lord of the Rings," and partnered with such popular artists as Stevie Wonder, Ray Charles, Joni Mitchell, and Sir Elton John.

Galway has played for a number of international dignitaries, including Taoisigh, US Presidents, and Pope John Paul II. He has embarked on several teaching residences and has won numerous awards.

Galway lives with his wife in Switzerland and currently plays on a Platinum ‘Galway’ Nagahara Flute – specially commissioned for him. He and his wife launched The Galway Flute Academy, their educational platform that enables them to nurture and mentor flutists of all levels through their various programs.

In 2015, Galway discussed his upbringing and identity on The Nolan Show on BBC, saying: "I would like Ireland to be Ireland.

"People ask me 'where do you come from?' and I say Ireland.

"No (I don't consider myself to be Northern Irish). I am Irish.

"(The difference) is very complicated. They say, 'well how do you become a Sir?' I say, 'because I come from the British occupied part of Ireland'.

"Then when I grew up we grew up as Protestants and we were brainwashed to the Protestant ethic, and to their way of thinking. For example, we knew all the sights of London, Trafalgar Square, Buckingham Palace, and all that but we didn't know Stormont."