Next month Liam Neeson will star as Mark Felt, the FBI Associate Director who blew the whistle over Watergate and brought down Nixon. 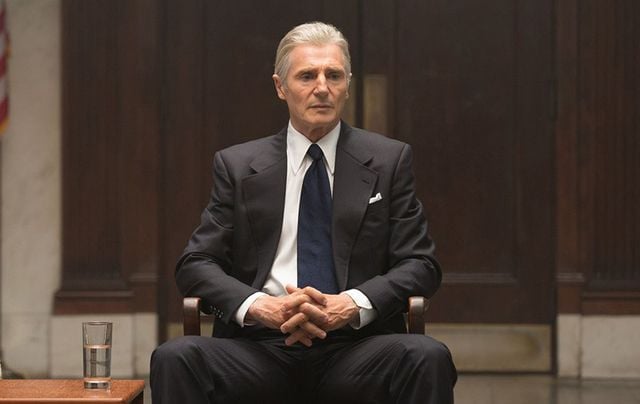 Liam Neeson as Mark Felt in "Mark Felt: The Man Who Brought Down The White House".

Next month Liam Neeson will star as Mark Felt, the FBI Associate Director who blew the whistle over Watergate and brought down Nixon, in "Mark Felt: The Man Who Brought Down The White House".

Neeson’s thrilling return to the big screen just as the Trump presidency faces its own special counsel investigation over suspected Russian meddling could hardly be more timely, although the film actually started shooting in 2016, well before the election.

"Mark Felt: The Man Who Brought Down The White House" will have its world premiere at the Toronto International Film Festival next week and will then open in select cities on September 29.

On screen, Neeson – who was just confirmed as America's favorite Irish celebrity –  sports the striking grey locks of the man whose identity did not become known for years after the Watergate scandal broke. Felt served in the FBI's second-highest-ranking post from May 1972 until his retirement from the FBI in June 1973.

Read More: Liam Neeson as Deep Throat and 7 things you didn't know about him

During this time he became an anonymous informant to reporters Bob Woodward and Carl Bernstein of The Washington Post, providing them with top secret and explosive information about the Watergate scandal that ultimately led to the resignation of President Richard M. Nixon in 1974.

Are you excited to see Liam Neeson play Mark Felt? Let us know in the comment section.