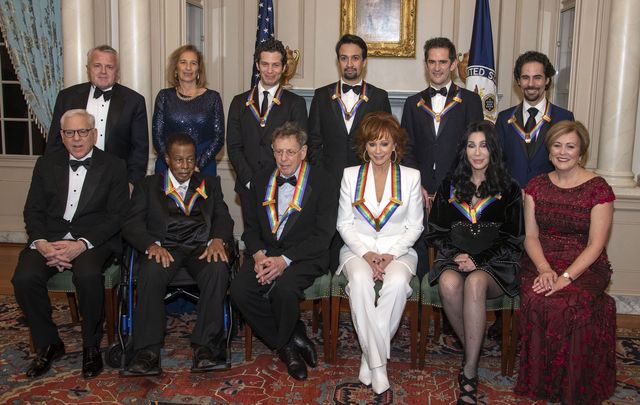 Also at this year’s awards, the team behind the Broadway smash hit Hamilton were presented with a first-of-its-kind honor. Writer and actor Lin-Manuel Miranda, director Thomas Kail, choreographer Andy Blankenbuehler, and music director Alex Lacamoire received an award that recognized them as “trailblazing creators of a transformative work that defies category.”

Deborah F. Rutter, president of the Kennedy Center, said: “The world looks to America for its creative instincts and artistic courage.”

“This year’s slate of Honorees represents the pinnacle of our nation’s originality and the rich mosaic of diverse perspectives and art forms that has come to define who we are as a people.”

Special homage was presented to former President George H.W. Bush who passed away on November 30 at the age of 94.

Host Gloria Estefan said: “I think it’s appropriate to recognize the passing of a wonderful man who dedicated his life to service and who graciously attended this event many times during his administration, laughing, applauding, singing along and even shedding a tear from right up there in the presidential box.”

The Honors Gala will be broadcast on the CBS Network for the 41st consecutive year as a two-hour primetime special on Wednesday, December 26 at 8 p.m. ET.