The battle of the two Irish American top late night hosts is not turning out as expected. Stephen Colbert is kicking butt over Jimmy Fallon. 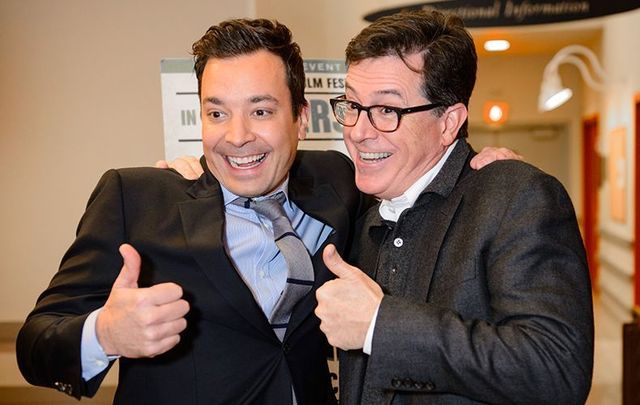 The battle of the two Irish American top late night hosts is not turning out as expected.

Colbert must kneel by his bedside every night and pray to St. Donald of Trump Tower who has fueled his gains as satire and ridicule and hard-edged routine threaten to swallow up the old-fashioned Jimmy Fallon who does comedy and celebrity guests and, for the most part, avoids the political arena.

It was not supposed to be so. When they took over their respective shows from legends Jay Leno and David Letterman, Fallon quickly jumped out to a clear lead as Colbert foundered.

Colbert was in so much trouble that there were strong rumors that CBS was considering an alternative host.

Then came Tuesday, November 8th, 2016 and the election of  Donald Trump. During the campaign, the abiding image of Trump on Fallon’s show was the Irish American playfully messing up his hair.

Read More: Did you know Stephen Colbert is 94% Irish?

After the election, on CBS, it was Colbert getting bleeped as he used forbidden words to describe the president.

The other big commentator, Jimmy Kimmel, has also jumped in the ratings with his Trump schtick thanks to an impassioned plea for health insurance and Obamacare which covered the condition of his own baby who suffered from heart problems.

As a result of Trumpian focused TV, the New York Times reports that Fallon has lost 21 percent of his audience since the Fall season began.

Suddenly it became obvious that bashing the president spurred on ratings. Colbert dived in head first, Fallon hesitated, more an old style comic and entertainer than a political pundit.

The result was a loss of about 700,000 viewers as Stephen Colbert’s overall viewership has increased. In 2016 BT (Before Trump) Fallon had 3.3 million viewers, Colbert 2.9 million and Kimmel 2.3 million

There seems very little NBC can do about it. Fallon, unfortunately for him, is not comfortable with the hard-hitting language of the time. Colbert’s interviews are also different, more direct, less humor.

The numbers show he is certainly reflecting the tenor of the times and unless those times change Fallon may be the one anxiously watching the exit door.

Who's your favorite late night television host? Tell us in the comment section.