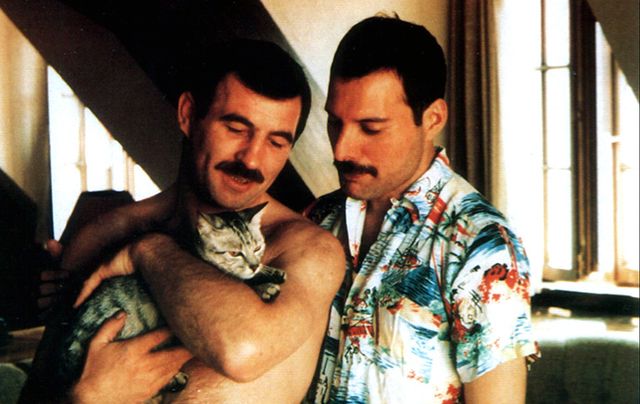 Jim Hutton with Freddie Mercury and their cat.

McCusker, is most famous for his role as Jamie Maguire in the United Kingdom version of the tv series “Shameless”. Star of the TV series “Mr Robert” Rami Malek will play Freddie Mercury and “Downtown Abbey” star and Dubliner Allen Leach will play Paul Prenter, Mercury’s controversial manager.

Last week another Dubliner Aidan Gillen, of “Game of Thrones” and Tom Hollander of “The Night Manager” were mentioned about the cast. Gillen will play John Reid, who managed Queen from 1975 to 1978 while Hollander will play Jim Beach who took over the role in 1978.

Mercury’s Irish boyfriend, Jim Hutton, was a hairdresser from County Carlow. He was a key figure in Mercury’s life. The couple were together for six years before Mercury’s death. Hutton was the Queen front man’s carer and was by his side when he lost his life to AIDs in 1991.

Their relationship was largely private and only because known to the public through Hutton’s book, “Mercury and Me”, which chronicled their relationship. Hutton passed away in 2010, from cancer.

The movie, which is already in production, is being directed by Bryan Singer, the Script was written by Anthony McCarten (Theory of Everything) and Justin Haythe (Red Sparrow, Revolutionary Road), and is being produced by Jim Beach, Robert De Niro and Graham King. Arnon Milchan, Denise O’Sullivan and Jane Rosenthal are Executive Producers.

Production on Bohemian Rhapsody is underway, and the film is due for U.S. release on December 25, 2018.