The Canadian actor will face a 20-day trial in 2018 regarding his alleged culpability in Caithríona White’s death. 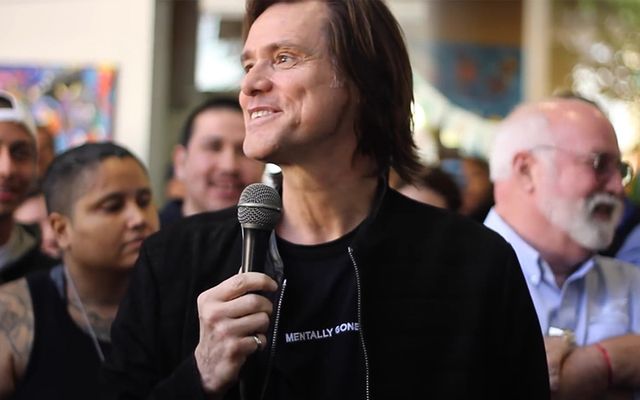 Hollywood actor Jim Carrey has become a viral hit after his rousing speech about the power of forgiveness was posted online. Carrey is currently in the midst of a legal battle with the husband and mother of his former Irish girlfriend Cathríona White regarding his culpability in her death, and he spoke about how his faith has helped him to forgive.

The “Eternal Sunshine of the Spotless Mind” actor was speaking to former convicts at Homeboy Industries, an organization that “provides hope, training, and support to formerly gang-involved and previously incarcerated men and women allowing them to redirect their lives and become contributing members of our community.”

“You are heroes to me, and I admire you,” Carrey told the crowd.

“When you stepped through these doors, you decided to be a part of this family. You made a decision to transcend and to leave darkness behind, and it takes a champion to make that decision.”

The 55-year-old actor mentioned his own faith in his speech, outlining how it has helped him to overcome recent difficulties in his life.

“Ultimately, I believe that suffering leads to salvation. In fact, it’s the only way,” Carrey said.

“Your being here is an indication that you’ve made that decision already,” Carrey added.

“You’ve made the decision to walk through the gate of forgiveness, to grace—just as Christ did on the cross. He suffered terribly and was broken by it, to the point of doubt and a feeling of absolute abandonment, which all of you have felt.

Carrey will appear in court in 2018 over the death of his Co. Tipperary-born former girlfriend Cathríona White as a result of a lawsuit taken out against him by White’s family. The case has been put forward by White’s estranged husband, Mark Burton, and her mother, Brigit Sweetman, who claim the “Dumb and Dumber” star played a role in the Irish make-up artist’s death.

Suffering leads us to a decision, and Jim Carey explains the choice at Homeboy Industries. Incredible. https://t.co/YpWYB2PMRo

On learning of her death, Carrey said, "She was a truly kind and delicate Irish flower, too sensitive for this soil, to whom loving and being loved was all that sparkled.” He acted as one of the pallbearers at her funeral in Tipperary after which White’s similarly estranged mother called him “a very nice man.”

Sweetman has since changed her tune, however, launching legal action against the Canadian actor and accusing him of providing the prescription drugs Ambien, Propranolol and Percocet, on which White overdosed.

Although Carrey’s lawyers have described the claims as “malicious” and “predatory,” Judge Deirdre Hill of Los Angeles Superior Court ruled in June that the trial would go ahead, setting a date for what could be a 20-day trial for April 26, 2018.

“What a terrible shame. It would be easy for me to get in a back room with this man’s lawyer and make this go away, but there are some moments in life when you have to stand up and defend your honor against the evil in this world,” Carrey said in a statement when the original complaint was made.

He was invited to appear at Homeboy Industries by Jesuit Priest Father Greg Boyle. Jim Carrey's speech was really from his heart. ??

“I will not tolerate this heartless attempt to exploit me or the woman I loved. Cat’s troubles were born long before I met her and sadly her tragic end was beyond anyone’s control.

“I really hope that someday soon people will stop trying to profit from this and let her rest in peace.”