James Vincent McMorrow, an Irish singer-songwriter, will be live-streaming his first album "Early in the Morning" on Thursday, April 9 - tune in here! 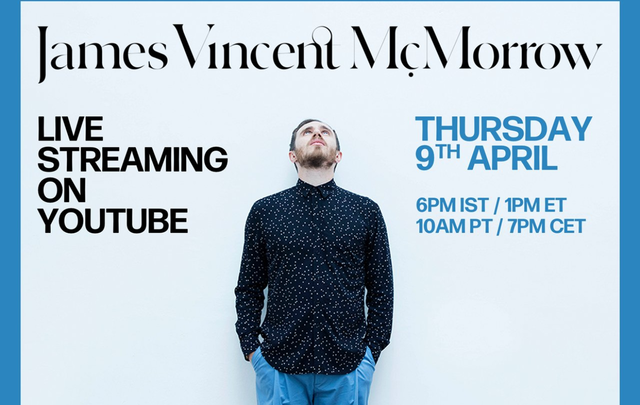 James Vincent McMorrow, an Irish singer-songwriter, performed his debut album "Early in the Morning" live on YouTube on Thursday, April 9.

James Vincent McMorrow has been live-streaming music sessions on his social media platforms ever since our strange new reality during the coronavirus pandemic hit.

On Thursday, April 9, McMorrow live-streamed his debut album in full via YouTube, and you can watch it right here:

James Vincent McMorrow is best known for his albums Early in the Morning and Post Tropical. His musical life only after he was well into his teens.

On thursday i'm going to play my entire first album,Early in The Morning.

I loved doing the streams a couple weeks ago but wanted to do something new,been over 9 years since this album came out which is wild, we're all home together,so let's do this. J https://t.co/Ep1fqQyPAN pic.twitter.com/LnsEgDMaUj

His music career started out in the drumming department. By the time he'd hit university age mellowed some and discovered more acoustic-oriented sounds. like Sufjan Stevens and Band of Horses. At 19 he took up the guitar, inspired by Donny Hathaway's "I Love You More Than You Will Ever Know." He began writing songs heavily influenced by the music of the 1970s singer/songwriter era.

McMorrow began playing shows in local pubs and was well received.  Deciding to record Early in the Morning, which he'll perform on Thursday, he moved into a small house in Ireland, with his guitar, a keyboard, a microphone, a computer, and several other instruments. He wrote and cut what would eventually become his debut self-titled EP, and his first album, Early in the Morning.