Beautiful Irish artwork celebrates Halloween darkness all through the year

Paul Nixon, a North Carolina-based Irish artist, has work displayed all over the world, including a bust of Queen Maeve in the WB Yeats Museum in Sligo. 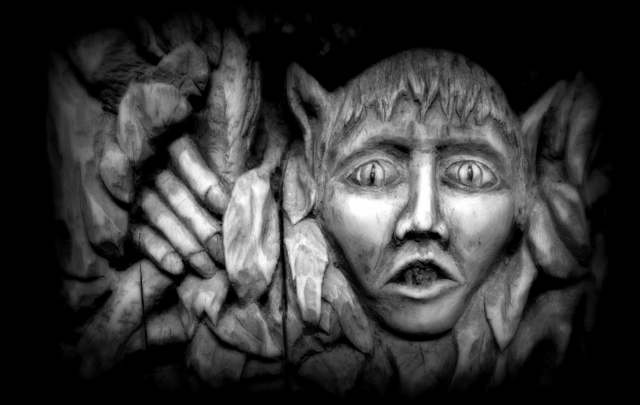 This spooky artwork by Paul Nixon is perfect for Halloween.

If Leonardo da Vinci was up on his Halloween he would give Paul Nixon a paint-stained thumbs up.

But his work is not only on display in his adopted home town.

It is in demand and on show, here, there, and everywhere.

Nixon has never shied away from trying something novel or moving somewhere new.

He once crewed on a tall ship during a transatlantic race and on another occasion, drove in an emergency food convoy across Saharan Africa.

So moving to the U.S. was one of the less complicated changes of tack that Nixon undertook, that being when he was 46-years-old.

This image by Paul Nixon is actually sculpted in cement.

Like so many other Irish, Nixon arrived in the U.S. in the mid-1980s. His initial landing found him living and working in Westchester County, just north of New York City.

Nixon had turned down a chance to work in his father’s construction company in Dublin. His thumbs-down to the family business followed an early departure from high school, and a period of some uncertainty in his life.

“What I did want to do was prove my own real worth to myself, do my own thing,” he said.

“I thought that getting a trade would be a way to both emigrate and get good work.”

Nixon opted to train as a car mechanic. By the time he qualified, he knew exactly the direction he wanted to go: west.

By 1985, Nixon was in New York, where he struck up a partnership with a Haitian immigrant. The two men bought a run-down car-repair business. The business hummed along nicely for twelve years.

The church at Drumcliffe, County Sligo where Yeats is buried by Paul Nixon.

“We had a good thing going,” Nixon recalls.

Things were about to go even better. One particular customer was having a problem with the air conditioning in her car. Her name was Francesca and she was from Long Island.

Nixon was sympathetic and patched up the air conditioning for a nominal fee. But he reckoned Francesca was just putting off the evil day. A half-decent summer heat wave and that AC would be history.

Sure enough, the weather warmed up and Francesca rolled in.

Not surprisingly, she complained.

Nixon gave Francesca a loan of his car for the day and some money to fill the near-empty gas tank. He rounded off the day by presenting her with a repair bill of $500 and a request for a date that would feature a night of ballroom dancing.

Within a year, and helped along by more than a few rumbas and tangos, Paul and Francesca were married.

A wood carving of witch with Halloween very much in mind by Paul Nixon.

Where to settle down was the big question. Ireland was discussed; New York was considered, but so too was its expense.

Finally, North Carolina won out and that is where Paul lives today Francesca and their daughter, Ana Claire.

“I knew nothing of the South, but what was easy to see was that you got more for your dollar down here,” Nixon said.

Once in Greensboro, Nixon resumed working as a mechanic and also tried his hand at gardening and landscaping. Ballroom dancing continued to occupy his feet.

But his hands were about to lead him in a different career direction.

“I used to dabble with woodwork years ago and once made a replica of a model ship as part of an effort to quit smoking,” he said.

“It was a square-rig Baltimore clipper. I had a thing about ships.”

And, as it would turn out, a thing about wood.

“My wife’s uncle gave me a woodworking lathe and I started to make a display case supported by spindles. My wife said that one of the spindles would make a nice walking stick for her aunt.”

Nixon put everything to one side and began to turn the length of wood into a walking stick.

“I put on a handle, but then had the idea of making it a little more special,” he said.

This cat was keeping guard at St. Canice’s Cathedral in Kilkenny. By Paul Nixon.

So he carved out the shape of a leaf on the stick.

“It didn’t look half bad, so I carved another leaf, and then a vine,” he said.

“It became a bigger and bigger project and it took months. It was grueling, but in the end it turned into something quite unique.”

When others caught a glimpse of Nixon’s intricately carved walking stick, they began asking the Dubliner to make more of them.

“One elderly man asked me if I could make him a stick with the face of Jesus Christ on it, which I did,” he said.

“I also made a mold of the man’s hand, so I could give him an exactly fitting handle.”

Nixon had, by now, laid hands on his ultimate vocation.

“I always had an interest in Celtic mythology, which took hold during summer holidays in Sligo,” he said.

“So the next thing I carved was a crosier with a lion’s head from the Book of Kells on it.”

Nixon’s talent was becoming clearer for more to see but he knew there was more to learn about a hobby that was fast turning into a new way of making a living.

He enrolled in a woodcarving class at Greensboro Community College, where he met and exchanged ideas with other woodcarvers.

Before too much time passed a teaching vacancy arose. Nixon got the job.

It was inevitable that Nixon would end up matching works based on Irish history and mythology with their local equivalents.

Nixon’s first large-scale commission, in every sense, was a 17-foot totem pole, which is now rising from the ground at an “international peace site” located in a Greensboro elementary school.

“I started off with a fifty-foot cedar tree in the woods and remember wondering how I was going to manage it in the eight weeks I was expected to carve the totem pole.”

The fact that he did complete the job on time and in good order went a long way to cementing Nixon’s reputation for both artistic skills and a businesslike ability to get the job done.

Paul Nixon’s carving in wood of a leprechaun.

Stories in the Greensboro papers have led to greater exposure and more commissions. Nixon is now referred to as a “local artist” and that’s fine by him.

It was also fine by the Greensboro Fire Department, which asked Nixon to take another step on his artistic path and sculpt a bronze tribute to the city’s Bravest depicting a firefighter rescuing two children.

“I really like it here, though I never expected to make a life quite like this,” Nixon said.

“But I’m delighted to be bringing attention to my own Irish culture through wood carving. There are a lot of Scots Irish in these parts who are very interested in it.

Over the years, Nixon’s spread well beyond Greensboro.

A bust of Queen Maeve that he sculpted found its way to the WB Yeats Museum in Sligo.

And that first walking stick has blossomed into a steady stream of orders for crosiers from bishops, Catholic and Episcopalian, across the United States.

His latest commission will see two bronze works heading for the Botanical Gardens down the road a bit in Charlotte, North Carolina.

Nixon has also been busy expanding his artistic work to photography and with Halloween in mind he is combining a series of black and white photos taken in Ireland with carvings, in wood and cement, of figures that would be associated with Halloween, the Samhain and Celtic mythology.

A number of Paul’s latest carvings are on a single eight-foot section of a tree that he wants to ship back to the cultural center in Clondalkin, County Dublin, where he grew up.

A Viking “Swearing Stone” in County Carlow. By Paul Nixon.

The shipping cost is prohibitive, but Paul is going about raising funds and hoping for a financial lift from the Irish government in the form of a grant.

“My skill set has expanded with photography,” says Paul.

“It began one day when I photographed some of the whimsical characters that I created.”

His photography now focuses on historical locations in Ireland with black and white his favored medium.

Those whimsical characters, Paul says, evolved in his mind when he was a child spending summer months in the mountains of County Sligo.

“It was stories from my grandmother, and WB Yeats stories, that influenced my wood carvings. My grandmother lives on the left side of Benbulbin and on the right side, about seven miles away, is where Yeats is buried.”

Paul’s photographs caught the eye of the William Butler Society in New York and he was duly invited to the city where he delivered a powerpoint presentation at NYU.

“It’s ironic,” Nixon said of his life now, as opposed to what it might have been.

“I never liked school and didn’t have much time for teachers when I was a kid in Ireland. Now I look at myself as a teacher. Life has turned full circle.”

Do you have a favorite piece of art linked with Celtic mythology or with Halloween? Share with someone who likes to spend their weekends studying Celtic lore.