The painting was given to the ‘people of Ireland’ but was being kept instead in London’s most famous art gallery. 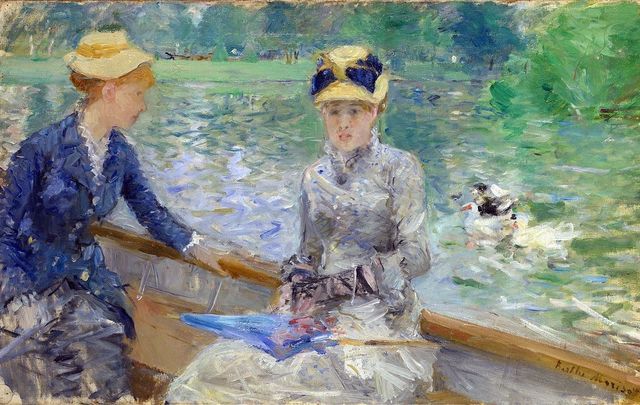 Described as one of the greatest heists of the 20th century, it involved two ordinary Irish students intent of rectifying what they saw as a historic wrong.

On April 14 1956, Paul Hogan, an art student from Dublin, and Billy Fogarty, a Galway man and trainee vet, walked into London’s Tate Gallery and casually walked out with one of its most famous paintings.

The brazen pair had even arranged for a press photographer to capture the moment they strolled out of the museum with Jour d’Eté tucked under Hogan’s arm. The only problem was they had no idea what to do next.

Berthe Morisot’s masterpiece was originally owned by art dealer Sir Hugh Lane. Sir Hugh was born in Cork and although raised in England was a regular visitor to the land of his birth. He died in 1915 after the RMS Lusitania was sunk by the Germans in the Great War. He had recently changed his will and asked that the prized painting be given to the ‘people of Ireland’ after his death.

But the updated will had yet to be officially witnessed and his previous request that Jour d’Eté be given to the Tate Gallery was honored instead.

Ownership of the painting was a minor source of dispute between the British and Irish Governments for decades afterwards.

“If you read the files from the time, they’re very patronizing towards Ireland – they actually say things like; ‘while we recognize the Irish state has a moral right to the paintings, we don’t believe the Irish are culturally aware enough to appreciate the works”, filmmaker Keith Farrell told the Irish Post.

Farrell and Stephen Hogan - the nephew of Paul - are currently making a movie about the heist.

“Almost from the foundation of the Irish state, the Irish Government tried to get the Hugh Lane paintings returned to Dublin, but by the 1950’s there was still no progress.

“It was this frustration with the British Government that was behind Paul Hogan and Billy Fogarty’s decision to seize one of them and return it home.”

The pair expected they would be stopped by security and had asked the photographer to capture it in the hope the press attention would put pressure on the British Government to give the painting to the Irish people.

The duo had spent days casing the art gallery, pretending to sketch whilst working out when the security guards took their lunch and teas breaks.

But having succeeded they were left bewildered as to what to do next. Neither were very familiar with the British capital and so they hailed a taxi and asked to be taken to one of the few places they could think of - Piccadilly Circus.

They ended up in an Irishwoman, Mary’s, apartment - they had only met her the night before in a bar - but she agreed to hide the painting for them.

Meanwhile, the gallery remained an oasis of calm.

Eighteen-year-old Dennis Fisk later made a statement to police recalling how he questioned staff about the painting’s whereabouts.

“I pointed to the blank space on the wall… and said to [a member of staff], ‘Shouldn’t there be a painting there?’. He said, ‘It has been taken to the photographers and may be away a number of days’.”

When the theft finally was discovered the Metropolitan Police assigned DCI McGrath to a case that had made the front pages of newspapers in the four corners of the world.

Irish Press coverage of the heist.

Like Hogan he was a Dubliner “It was a case of an Irishman hunting Irishmen,” Farrell says.

And Hogan wasn’t just any Dubliner; he was the son of Sarsfield Hogan a senior Irish civil servant who worked with Taoiseach (Prime Minister) Éamon de Valera.

“All hell broke loose,” Farrell admitted. “The family had the press knocking on the door and suddenly young Paul was the big fugitive of the time.”

Disguised as priests the pair headed for the small university town of Cambridge after asking Mary to take the painting to the Irish Embassy - whereupon it was immediately returned to the Tate by the diplomats.

Eventually Hogan and Fogarty reached Liverpool and made it onto the ferry bound for Dublin.

DCI McGrath knew the two “thieves” were most likely headed that way but phoned the Hogan household in Dublin to let them know he wouldn’t be taking any action.

“They got off the ferry and Paul’s mammy was waiting in the car. The only thing she said was ‘get in the car’, and that was that,” Farrell recalled.

The file on the case was released under Freedom of Information laws in 2013. It reveals that the police were wary of turning the two men into martyrs for the Irish cause - something the British had a habit of doing with Irish rebels.

“This was not a larceny with intent to sell the picture to somebody else. Although it was not exactly of a political nature, it was made in a misguided sense of patriotism… If these men were charged they would then be heroes or martyrs,” the file glumly opined.

“One other point too I mentioned, that in such proceedings, the complete lack of security measures, so far as a National Picture Gallery was concerned, would be revealed and it might encourage others with a real felonious intent,” it concluded.

But their actions succeeded. In 1959, it was announced that Ireland and the Tate would share the masterpiece for the next 60 years. When the agreement ends in 2019 many hope that Ireland will be given full ownership of the painting.

“We achieved what we set out to do. We were enormously successful in putting the issue in the headlines. I don’t think I was any more of a tear-away than anyone else I knew,” a now retired Paul Hogan told The Independent of London.

Hogan and Farrell hope the film will be released by then, with the hope that the publicity will ultimately help Ireland’s case in securing full ownership of a masterpiece that was gifted to the Irish people more than a century ago.