Acclaimed Teresa Deevy Project with The Suitcase Under the Bed and Puffs, or Seven Increasingly Eventful Years at a Certain School of Magic and Magic. 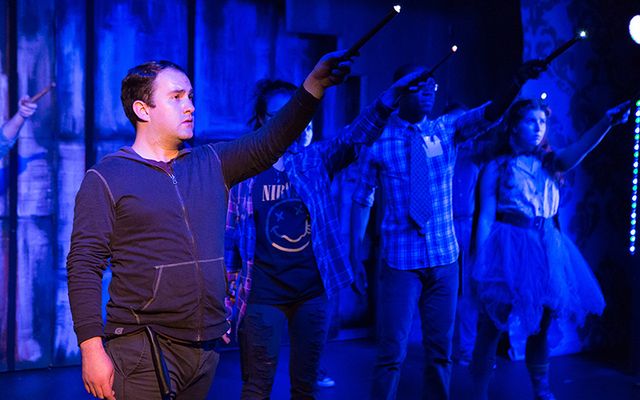 Ireland after the Civil War was not quite the theocratic gulag that it looks like now, or at least not at first. There were strong voices that challenged the prevailing conventions and asked hard questions about the nation’s direction.

Many of the most interesting voices of the period belonged to women.  After many long decades of scandalous neglect, Irish playwright Teresa Deevy’s works are being restored to us, and the lion’s share of praise for this endeavor belongs to New York’s Mint Theatre.

This month the theater has resumed its acclaimed Teresa Deevy Project with The Suitcase Under the Bed, a quartet of one-act plays named for the location where Deevy’s plays were stored away unseen and unperformed for decades (until artistic director Jonathan Bank arrived at the Deevy family home in Waterford in 2010 to begin the job of reinstating her reputation).

Staging four short plays that follow one wedding, three marriage proposals and two break-ups in one night, you better fasten your seat belts. One of the plays, the heartfelt The King of Spain’s Daughter (in its U.S. premiere) follows Annie Kinsella, a young woman “born with romance in her soul.”

In the Ireland of 1935, romantic women of any kind were considered deeply destabilizing to the nation’s idea of itself and that perhaps explains why the Abbey, Ireland’s national theater, stopped presenting Deevy’s work without explanation a year later, effectively ending her stage career.

In her production notes, Deevy tells us that to her character Annie, “life was the splendid glowing vision of a poet…yet she lived among peasants who saw her romanticism as wildness and folly, and merely called her liar when the splendor of her imagination gave the semblance of reality to her dreams.”

Reading this is like hearing the sentence pronounced on the author’s imagination and career a year later. Independently minded women would be of no use to Eamon de Valera’s fever dream of religious and Irish spiritual purity. Thank God for Bank’s persistence and Deevy’s talent.

The Suitcase Under the Bed, four short plays by Teresa Deevy plays through September 23 at the Beckett Theater at Theatre Row (410 West 42nd Street). For tickets call 212-239-6200.

And let’s hear it for Harry Potter, the boy wizard who almost single-handedly saved the British film industry, the British publishing industry and the pension plans of half the film actors in Britain and Ireland.

This summer you can catch a play that affectionately parodies the entire Potterverse from the perspective of Hufflepuff, the least flashy house in the Hogwarts school of Witchcraft and Wizardry.

We all know what happens to Harry. For seven years he contends with the increasingly dangerous Lord Voldemort, but what about all the un-chosen ones? What did they do while the bespectacled one preened and pouted over his fate?

In Puffs, or Seven Increasingly Eventful Years at a Certain School of Magic and Magic, the talented young cast offer up some hilarious answers in this nonstop magical romp.

Potter fans already know the books were a lot of fun, but the films were like a holiday camp for the world’s campiest actors. All they had to do was turn up, mug for the muggles, and get a tidy annual retainer from Warner Bros. for mostly sitting in their trailers, arching an eyebrow, or wearing a pointy hat.

Onstage the young cast has even more fun than the actors who originated the roles as they try to survive another semester in the most dangerous school on earth.

Underdogs in the school and in the wider wizarding world, Hufflepuffs value loyalty and justice above all else. “Some people rise from humble beginnings to defeat the forces of darkness in the face of insurmountable odds,” the program reads. “Puffs is the story of the people who sit in class next to those people.”

If you’re wild about Harry -- and we know that thousands of you are -- you will be stupefied by this rollicking show about fighting the real demons of adolescence: rejection, isolation and embarrassment.