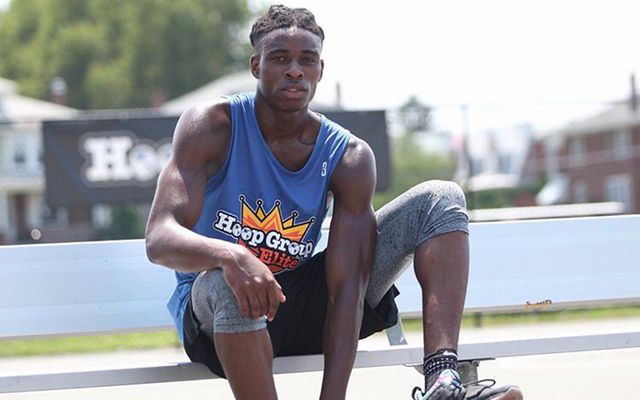 Will Aidan Harris Igiehon be the next Irish NBA player? @Big/-harris22/Twitter

Will we have our second only Irish-born NBA player in Dublin-born Aidan Harris Igiehon?

Irish basketball player Aidan Harris Igiehon is 17-years-old and has only been playing basketball for five years, but he has already received offers to play for 33 US colleges, including some top flight programs, when he finishes high school.

Born and raised in the west-Dublin suburb of Clondalkin, Harris Igiehon now lives in New York with his aunt and uncle although Ireland is and will always be home to him.

“I was born and raised in Ireland and my mother lives in Clondalkin and I was living there until I made the move over last year,” he told the Irish Times.

“I got home for a few days and spent most of my time in the Dublin Lions [his old club]. I love coming home. My mom loves when I come home. It brings a tear to her eye. She knows how much I want this.”

Appreciate all the love I'm getting from my country! #IrisAndProud ☘️ https://t.co/Ems7RKAS57

His journey from ordinary Dublin teenager to potential US superstar as the second ever Irish NBA player came about through his astonishing aptitude for basketball – a sport few play in Ireland in comparison to America.

“I just really loved the game from the moment I picked up my first basketball. I went to practice every single day and then I hit a growth spurt,” he explained.

He began playing for the Dublin Lions and was soon tapped to play for the Ireland team, as well.

Spotted instantly as one of Ireland's best basketball players

He was talent-spotted whilst in Philadelphia and now wants to play professional ball in the NBA .

It was, he admits, “a big transition” to leave Dublin but to play basketball is his dream and for that, no doubt at all, America is the place to be.

While plenty of basketball stars could be claimed by Ireland through family ancestry, Pat Burke is, so far, the only Irish-born man to play in the NBA. Burke was also born in Dublin. The 43-year-old signed a contract with Orlando Magic in 2002, playing 62 games with them. He also played with the Phoneix Suns and trained with the Golden State Warriors before returning to Europe for the remainder of his career.