She acknowledged interment didn’t work in Northern Ireland but thought it worth trying anyway on Britain’s Muslim community. 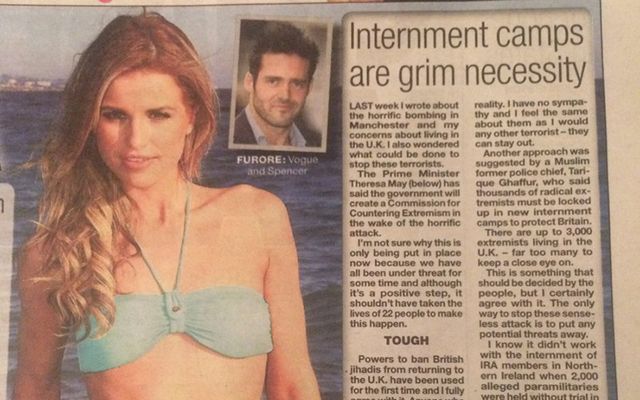 An Irish model has called for the reintroduction of internment camps following the recent terror attacks in Britain but faced a instant backlash online for her views.

31-year-old Vogue Williams wrote in her Sunday World column that “Internment camps are a grim necessity”.

"Powers to ban British jihadis from returning to the UK have been used for the first time and I fully agree with that," she told readers."Anyone who leaves Britain and Ireland to fight alongside ISIS can stay out.  I don't care what age or what their circumstances are."

Any individuals who change their mind and try to return should be turned away she added. “Tough luck”, she opined, adding she had “no sympathy” with them whatsoever.

Britain last used internment camps during the Troubles in Northern Ireland, when close to 2,000 suspected republicans and over a hundred loyalists were detained without trial.

Williams addressed this point, "I know it didn't work with the internment of IRA members in Northern Ireland when 2000 alleged paramilitaries were held without trial in makeshift camps," she continued.

"But in today's case the terrorists cannot be negotiated with.  They want to ruin the western world and they will stop at nothing to do this, so we need to have the same approach with them."

Aware perhaps the Irish Constitution gives people the right to trial and can only be changed by a popular vote, she concludes, “This is something that should be decided on by the people.”

The column quickly earned the ire of Twitter - many of whom dismissed Williams for her perceived lack of intelligence.

Here, eh, @VogueWilliams, you do realise whoever's ghostwriting your tabloid column is on about "internment camps" for Muslims, right?

Who says models have no brains ...https://t.co/w4JHHjatkz

However the column earned a repost from Irish Times journalist, Donald Clarke, who argued her views should be taken seriously.

I argue strongly that Vogue Williams is not an idiot. Her views are more sinister than that suggests. https://t.co/he4ghySR4r

“There has been a predictably patronizing, borderline sexist response to her column in the Sunday World,” Clarke writes.

“But she is writing a column in a national newspaper and, thus, deserves to be treated as seriously as any other commentator.

“We should not call her an idiot. We should calmly point out that her views are illogical, totalitarian and profoundly sinister.”

What do you think? Tell us in the comments below.