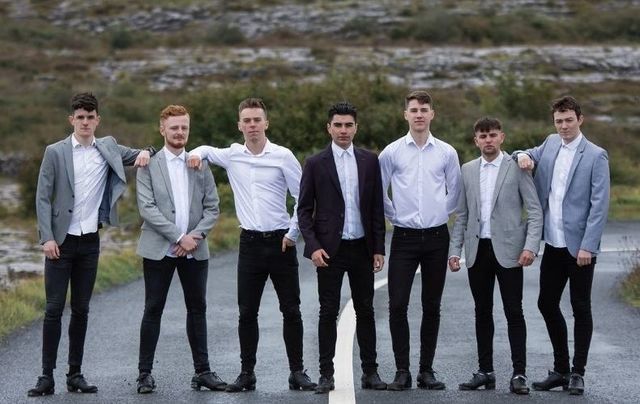 Cairde, a group of seven young Irish dancers from Galway, Clare, and Cork, have enjoyed a meteoric rise ever since they joined the popular video-sharing app last summer.

The group has amassed more than 1.7 million followers on the app and has made a name for itself by putting an Irish dancing twist on popular dance trends.

Cairde, which means friends in Irish, have gained a massive following on TikTok by repurposing traditional Irish dancing steps to fit modern beats.

In one of their latest videos, three members of the group danced in perfect synchronization to "From Now On" from the popular musical "The Greatest Showman".

Once again, they knocked it out of the park.

The group shot to fame last summer thanks, in part, to their take on the "Banjo Beats" dance trend.

The audio clip was one of the most widely used sounds on TikTok last year and, with 14.3 million likes and more than 87 million views, Cairde's video was the third-most-popular video using the song.

Ronan O'Connell, one of the group's founders, told IrishCentral last October that the video caused Cairde's popularity to skyrocket overnight.

Cairde reached 300,000 followers within 24 hours of posting the video. Their viral clip had also been viewed more than 14 million times in a single day.

"We were addicted to our phones. It was hard to put them down," O'Connell said. "It was crazy. It was even hard to sleep that night without picking up the phone," he said.

The video gave Cairde unstoppable momentum and they have since appeared on Ireland's Late Late Show and turned down invitations to America's Got Talent.

O'Connell said that the group's popularity was spreading Irish dancing to an audience that knew very little about it.

My go-to cheer-me-up has to be the boys, Cairde. They hit 1.7 MILLION followers yesterday on TikTok, 100k on Insta, and have had a global audience of 50,000 tune in to watch them livestream over the past two days. Here they are channelling @RealHughJackman @GreatestShowman 🎩 pic.twitter.com/uBeiCDcPuP