The World Cup sparks more heated arguments between couples and relationship break-ups in Ireland than any other sporting tournament in the world, therapists have revealed. 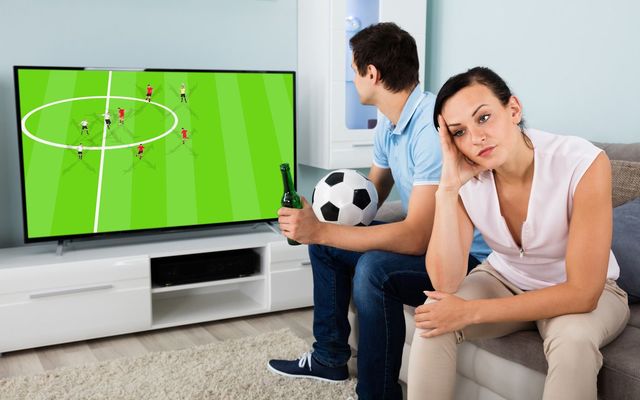 The World Cup sparks more heated arguments between couples and relationship break-ups in Ireland than any other sporting tournament in the world, therapists have revealed.

Marriage counselors have identified the month-long tournament which is now underway in Russia as a period which is likely to increase tension in thousands of households across Ireland and even trigger the final whistle for those stuck in already rocky relationships.

Relationship experts warned that problems will quickly arise in households where one partner — usually the husband — is constantly glued to the TV, while his wife feels sidelined as she has zero interest in the sport.

Tony Moore, who runs Talking Point Counseling in Portlaoise, Co. Laois, said, "I know from experience that demand for services always increases after a big sporting tournament, particularly the World Cup, and that's no surprise because it's the biggest and most popular sporting event in the world, and, of course, it goes on for so long.

"If both partners enjoy football, then there probably won't be any problems.  But that's often not the case and more often than not, females can feel very neglected if their partners or husbands are spending every spare minute watching matches.

"They basically stop talking to each other for the month, and their sex life is likely to suffer during this period.  Then, if there's boozing involved and constant trips to the pub  to watch the games with friends, then that can lead to even more problems."

Kind of looks like she wants to change the channel, no? Image: iStock.

Moore stressed that couples are unlikely to call time on their relationships solely because of the behavior of one of the partners during the World Cup.  But he warned that the next few weeks could prove to be the tipping point for those in already unhappy marriages.

"A lot of women are going to feel very lonely over the next few weeks if their husband puts the World Cup before them all the time.  Young children can suffer too during this period, as they may not get to see as much of their Dad as they usually do during this period."

However, Moore said footie-mad fellas could avoid getting the red card from their other-halves by making a few "reasonable compromises" while the month-long tournament is going on.

"I would advise football fans to plan ahead and identify which matches they most want to see.  If you're watching every single minute of every single match, then you're more likely to encounter problems,” he said.