Brilliant U.S. soccer team goalie Hope Solo has signed on to Ireland's national broadcaster as a commentator for the 2018 Russia World Cup. 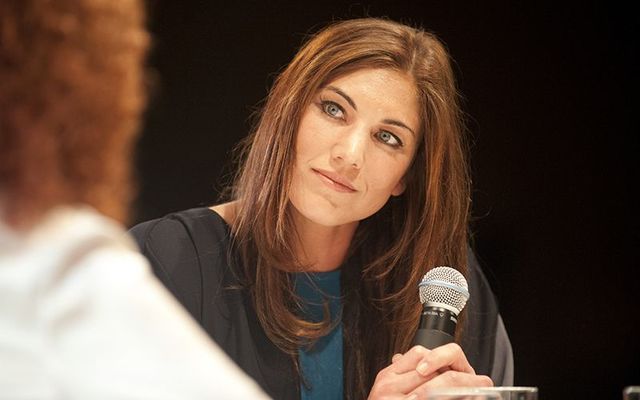 Brilliant U.S. soccer team goalie Hope Solo has signed on to Ireland's national broadcaster as a commentator for the 2018 Russia World Cup.

Soccer – or football in most parts of the world – will take center stage for the next month as the World Cup gets underway in Russia, and though the Irish Republic didn’t make the finals, the national broadcaster RTE will televise a bunch of the games with a rather (in)famous Yank providing exclusive commentary.

Hope Solo, the brilliant U.S. soccer team goalie, winner of two Olympic gold medals and, of course, a former Dancing With the Stars contestant, inked a deal with RTE last week.  She was pursued by a number of other outlets, including the BBC, to talk about the games, but RTE managed to get her.

“It was a long process securing Hope Solo because there was so much interest. She’s a massive name with a huge global following and she had her share of offers so it’s a real coup to get her on Irish TV. She could have gone anywhere,” a source told the Irish Sun.

Solo, author of a best-selling autobiography, has had some run-ins with the law, having been charged with battery against her sister and nephew a few years back; the charges were only dropped last month. She was also suspended for six months by U.S. Soccer, the governing federation for the sport, after accusing the Swedish women’s soccer team of “playing like cowards.”

Hope isn’t shy about voicing her opinions on lots of things, so she’ll likely provide lots of spice for RTE’s coverage.