Irish American is the king of Hollywood stars' tattoos

The famed Mark Mahoney includes everyone from Johnny Depp, to Lady GaGa, to Mickey Rourke in his extensive clients list. 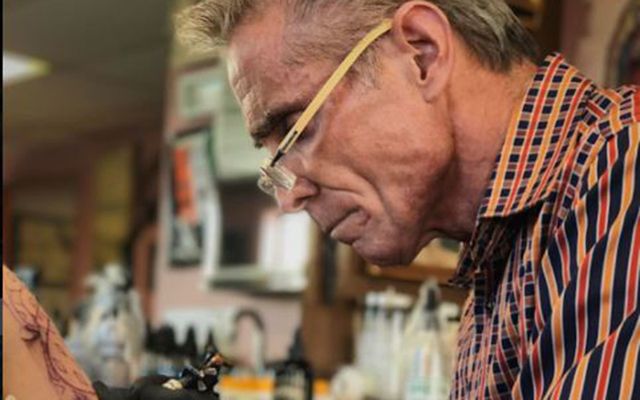 The interior design of the Shamrock Social Club leaves no doubt that the owner is Irish. From the front door mat emblazoned with the name accompanied by a large shamrock, to the pictures of JFK, Catholic icons and even 1916-2016 Easter Rising memorabilia littered around the chairs, the famous tattoo parlor and its owner Mark Maloney may be based in LA but everything about them screams Boston Irish.

Once described by comedian Russell Brand as a “living skeleton Elvis,” the silver-haired Mahoney, 59, is thought to be half the attraction of the parlor, winning people over with his quiet charm, incredible artistic talent, and flawless mafia-era style.

Brand has said that Mahoney is “so charming and enchanting I kept getting myself tattooed just so I could suss him out.” Mickey Rourke and actor Johnny Depp can be counted among the former Bostonian’s closest friends and customers. Well, Rourke was until Mahoney was unable to fit him in before a fight in Russia. The actor and retired boxer is said to be recovering from the disappointment but Mahoney admits to missing him.

It’s not often that Irish people are regarded as the epitome of cool – the best we’ve ever really succeeded at it on a global scale is Bono with his endless leather jackets and indoor sunglasses – but Mahoney is internationally renowned not just for his incredible skill as a tattoo artist but for being as hip as they come.

Mahoney has impeccable style and is known as one of the leading tattoo artists of our time, boasting clients such as Lady GaGa, Lana Del Rey, David Beckham, Adele, Angelina Jolie, and Tupac. Del Ray even regards the artist as her muse, featuring him in her videos for “West Coast” and “Shades of Cool.”

Mahoney's shop – "Where the Elite and the Underworld Meet" – is located in the heart of Hollywood on Sunset Boulevard and the recovering drug addict has become a giant in the business. When he started out a tattoo artist was someone mostly associated with the underworld only, but, thanks to the those like Mahoney, getting 'inked up' has become increasingly mainstream.

He started off tattooing racist symbols onto the skin of drunk Hell’s Angels bikers in Massachusetts, made his way to New York before transferring to the west coast, where he worked as a journeyman of sorts in L.A.’s South Bay. Now, with 40 years in the business behind him, he’s found himself “booked-six-months-out, appointment calendar filled with green-juice-toting ‘mothers and their daughters from Beverly Hills,’” says the Hollywood Reporter

“I feel like I'm dreaming,” he said of his change of fortune.

And we are done x

Mahoney often speaks of his Catholic guilt and his religious fervor and that he had to try harder to be a good person, considering he was meddling with all types of drugs and all types of people. He concluded that he could still be religious and a good Catholic despite working in a profession his parents would have regarded as seedy.

Some of his clients even refer to him as being a priest, calling him Father Silver or stating that he is “more like a priest than a tattoo artist”.

“It’s not so much what he says, although when he does speak you listen,” one fan states.

“Maybe it’s because he knows. Yeah, Mark Mahoney is a shaman and the shamrock is his church. The moment you enter the Shamrock Social Club you can feel that it’s hallowed ground. If you ask him about it, he’ll just change the subject but he knows.”

The Irishman has also recently taken a foray into acting, something he says allows him to live out his mafia fantasies. His credits include the film “Black Mass” with Johnny Depp about fellow Irish Bostonian Whitey Bulger, someone Mahoney says “every Boston Irish kid looked up to.”

A unique insight into the man, as opposed to the myth of Mahoney, came through in the documentary “Wonder Mark” directed by Ivan Olita.

“People consider him a legend in the tattoo world, but his fame goes beyond that of the needle,” said Olita of Mahoney.

“Mark is a kind soul. His persona is surrounded by an air of mystery. When I look at him I always have the impression that he knows more than he is willing to tell, and this is what makes him so elegant and solid.”

His quiet demeanor today reveals nothing of Mahoney’s wild past. Brand retells an anecdote of the tattoo artist which tells of the party animal antics he used to enjoy. As Brand tells it, while still taking copious amounts of drugs and living in New York City, Mahoney took a shining to some work of a homeless man on the way to a party. Leaving his own work and that of the homeless painter’s in the hallway while he went to shoot up in the bathroom, Mahoney was delighted to hear Andy Warhol admiring what he thought was his work only to emerge extremely high to find that it was, in fact, the work of the homeless man that had caught the famous artist’s eye.

Mahoney has now dropped his 25-year habit and and is proprietor of the Shamrock, which his wife of 25 years, Nicole, runs along with a local vintage shop. Mahoney has two daughters and the whole family’s life has revolved around the club. His eldest daughter, Amalia who's 23, has taken up the family trade recently, practicing with a Betty Boop on her father’s leg.