The hugely popular Dublin-set hairdressing comedy “Deadly Cuts” is now the No.1 movie on Netflix Ireland and is set for release in North America. 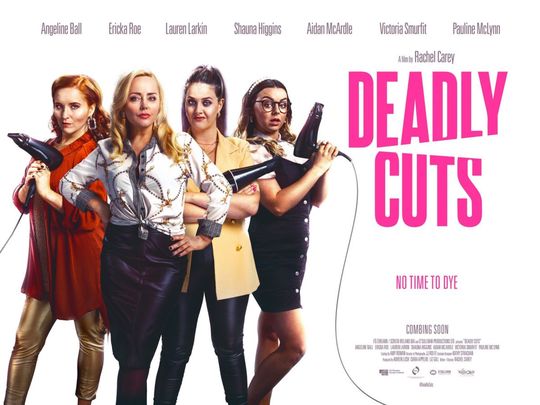 The hugely popular Dublin-set hairdressing comedy “Deadly Cuts” is now the No.1 movie on Netflix Ireland and is set for release in North America on St. Patrick's Day, March 17.

The feature-length comedy “Deadly Cuts” follows the stylists of a Dublin hair salon who become accidental vigilantes as they take on a local gang threatening their community.

Starring a strong Irish female cast including Angeline Ball ("The Commitments", "Shameless"), Victoria Smurfit ("Once Upon A Time", "Marcella") and Pauline McLynn ("Father Ted"), along with Aidan McArdle (Black 47, The Fall).

The feature debut, “Deadly Cuts”, from writer/director Rachel Carey now ranks in the overall top three picks in Ireland on the Netflix streaming platform. The news comes as Myriad Pictures announced that it has licensed “Deadly Cuts” to Level 33 Entertainment for distribution in North America.  The company will release the film on March 17, 2022, to coincide with St. Patrick’s Day.

Following its theatrical release in Ireland and the United Kingdom on Oct 8 last year, the film ranked in third place on its opening weekend behind "No Time To Die" and "The Addams Family 2". The comedy was the most successful Irish film of 2021 and was the highest-grossing film by an Irish female director in 20 years. The film also opened in the top ten at the UK / Ireland box office.