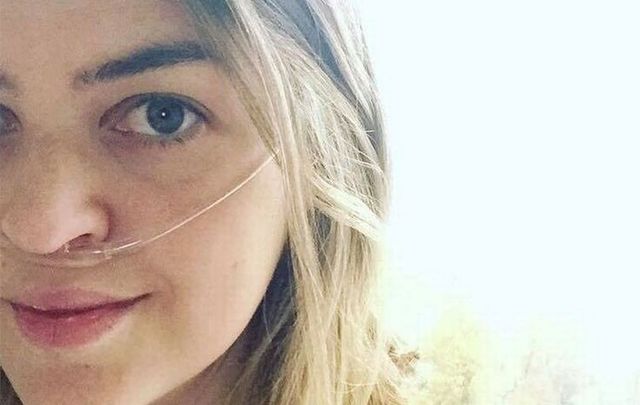 The avid campaigner Orla Tinsley was the subject of a moving documentary on RTE One on Monday night, sharing a glimpse into the journey that led her to the seventh call lucky.

After six false alarms, Tinsley received word that she would be given a new chance at life. The 30-year-old had been waiting in New York for months before her double lung transplant in December 2017.

While on life support at the New York Presbyterian Hospital, the Kildare woman still allowed a camera crew to document the distress, the disappointment, and the life-changing surgery.

It was a real privilege to be able to take Great Strides for CF this morning with an incredible group of people. Thank you so much to all my friends who came out to support and stride! Life is so much more beautiful with people like you in it. Today would not have been possible without my donor. I thought of them all day. Another person it would not have been possible without is my CF consultant, Dr.Walker, from Mount Sinai Beth Israel who I happened to see on line before the walk started. I hadn’t seen her since she visited me during my recovery in the ICU last December. It’s easy with the new routine, life and transplant commitments to neglect to look back, because looking back can be tough, but today I salute her great work and remember the many, deep, hard earned wins we made together and how her team helped me through my darkest times. #greatstrides #newyork #ninjamoves #lungtransplant #organdonation #OrlasOgres #Ogrelife @cf_foundation @mountsinainyc #cysticfibrosis

She shared the moments of elation and devastation for one reason: to raise awareness about organ donation, transplants, and Cystic Fibrosis.

As hundreds of people took to social media to commend her braver, Tinsley shared online:

"I have no words for the response tonight. I am in awe of the way people are reaching out, understanding and commiting (sic) to becoming donors. I appreciate and I’m reading every single story and response. Thank you for being part of this and making a difference. #Warrior"

Cystic fibrosis campaigner Orla Tinsley has urged people to consider organ donation. She has spoken of her experience in a documentary to be broadcast tonight pic.twitter.com/O4zy7DenwK

On Monday, Cystic Fibrosis Ireland and the Irish Donor Network also renewed their call on the Government for the introduction of presumed consent organ donation legislation to improve transplant rates in the country.

To request your own organ donor card, follow the link here or free text 'DONOR' to 50050.

A beautifully written account of the operation and recovery period written by Tinsley, a journalist, can be accessed here.

Orla is a wonderful role model for us all. Attitude. Resilience. Gratitude.#OrlaTinsley #warrior #orlatinsley

It's my honour to know @orlatinsley a little. A brilliant, decent and very funny woman, she's also worthy of the title 'warrior'. We really need an opt-out organ donation system here. Meantime, please think about getting an organ donor card. #OrlaTinsley https://t.co/gy7yi9JxlV

Only 15 minutes in to the @RTEOne documentary on her lung transplant and I'm completely in awe of #OrlaTinsley. A true warrior. We should have an opt-out organ donation system but until that happens please sign up to be an organ donor.

This is so beautifully written and so powerful. Ninja Tinsley is an extraordinary person. Apply for an organ donor card. I did, in January, because of Orla’s story. https://t.co/YH0tJitkxa

Watching #Orlatinsley and realising I have very little in life to worry about! What a fighter! Everyone should carry a donor card!! You can sign up for one here #warrior #organdonation https://t.co/DgdRnwKYUO…

What an incredible inspiration @orlatinsley is; her determination, courage, gratitude & positivity. And in her words “to go after your dreams, don’t care what anyone else thinks and live your life the way you want”. #orlatinsleywarrior #organdonation

I interviewed #OrlaTinsley today ahead of the doc. It hasn't left me. Tomorrow I will make sure to order a new donor card and carry it with me. Life is too precious.

I already knew it, but @orlatinsley you are INCREDIBLE. What a beautifully made documentary too. ❤️ #OrlaTinsley

Mind blown by the courage and attitude of @orlatinsley. Incredibly beautiful documentary so far. Tune in if you can. NOW! #orlatinsley #woundedwarrior @RTEOne

Emotional watching #OrlaTinsley brilliant doc with the family tonight. I’m in the middle of my own transplant story and she has given me huge hope.
I would urge everyone to consider #organdonation. It really is the greatest gift.

The documentary is available to watch on RTE Player here.

This  article was originally published in our sister publication U Magazine.