Galway girl serenades her idol Ellen Degeneres on her show

Ellen Degeneres flew 17-year-old Galway girl Eimear O’Tuathail to LA to perform on the show after catching her video online. 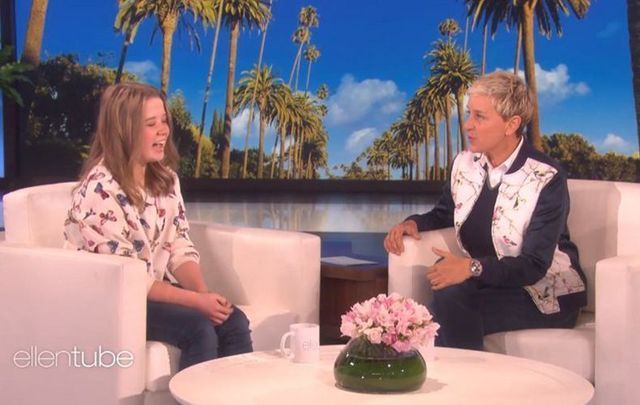 Eimear O’Tuathail is Ireland’s biggest Ellen Degeneres fan and she has a special song to prove it.

After a successful campaign throughout Ireland to win her attention, Ellen Degeneres this week flew 17-year-old superfan Eimear O’Tuathail from Ireland to LA so that the Galway girl could perform on her show.

Possibly one of the biggest Ellen fans Ireland has ever seen, singer-songwriter O’Tuathail had posted a video online of her tribute song to the TV host, hoping against hope that she would be noticed and given the opportunity to meet her idol.

"Mum got the call about two hours after the first story about me ran on the RTÉ site two weeks ago, so we flew over to LA," O’Tuathail told RTÉ Entertainment after getting the chance to perform her special song “Hey Ellen” on the show of the main woman herself.

"The only time I got to talk to Ellen was during the interview. I ran up to her and gave her a hug and we did the interview and it was about six minutes altogether."

Read more: Adele brings her Irish imitators up on stage in Dublin (VIDEOS)

The episode aired in the US on Tuesday and is not reaching Irish screens until next week but we can say that O’Tuathail definitely held her own, performing the song perfectly even though she was just given one take.

"We had a rehearsal and I thought `Ok, I'll get to meet her before we did the interview and I won't be crying and I'll be fine and also if I do mess up on the real thing they can just use the performance from the rehearsal,' the 17-year-old told RTÉ.

"But they told me that the first time I'd meet Ellen was when I went out into the studio and the only performance they would air would be the live one. So if I messed up, that was it!"

Thankfully, all went well, although the young singer was initially overwhelmed with tears when she first walked out to meet Degenerous.

"I did cry when I met her but they cut it out! I ran up to her and I kinda get a bit emotional. I kinda forget what happened but I gave her a hug,” she admits.

And not only did the young Irish woman win her dream of meeting Ellen and a six-day trip to LA but she was also awarded an amazing $10,000 check that we’re sure she'll make good use of, whether she decides to follow her music career or to carry on to college. Right now, she describes herself as torn between wanting to be a singer and wishing to study forensic psychology.

What do you think of "Hey Ellen"? Let us know your thoughts in the comments section below and be sure to share with anybody you think will enjoy it!