"The Wonder," the new Netflix drama starring Florence Pugh, is based on the 2016 novel by Irish writer Emma Donoghue. 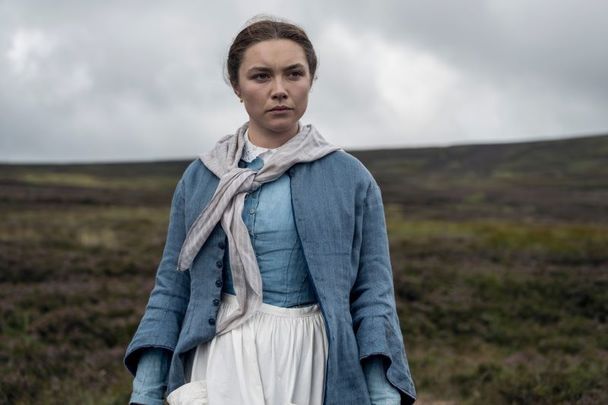 Florence Pugh as Lib Wright in "The Wonder." Aidan Monaghan/Netflix © 2022

"The Wonder," a Gothic Irish drama starring Florence Pugh, is out on US Netflix on Nov 16 following a limited theatrical run.

"The Wonder", Florence Pugh's new Irish drama has landed on US Netflix on November 16 at  3:00 am EST. It will later be available on Netflix in the UK and Ireland from December 7.

The period thriller, which is directed by Sebastián Lelio, is based on the acclaimed 2016 novel by Irish writer Emma Donoghue, whose 2010 novel "Room" was made into an Oscar-winning film.

According to a synopsis for "The Wonder," the story takes place in rural Ireland in 1862, thirteen years after the Great Famine.

In the film, Pugh plays the role of English Nightingale Nurse Lib Wright, who is called to the Irish Midlands by a devout community to conduct a 15-day examination of an 11-year-old girl. The young girl, played by Anna O’Donnell,  claims not to have eaten for four months, surviving miraculously on “manna from heaven." As Anna's health rapidly deteriorates, Lib is determined to unearth the truth, challenging the faith of a community that would prefer to stay believing.

The psychological drama, which is inspired by the 19th-century phenomenon of “fasting girls," was filmed in County Wicklow last year.

“The Wonder” was developed with the support of Screen Ireland and Access Entertainment. "The Wonder" had its world premiere last month at the Telluride Film Festival.