“Remembering Mychal” celebrates the life and community which surrounded the Franciscan priest the first victim of the World Trade Center attacks 21 years ago. 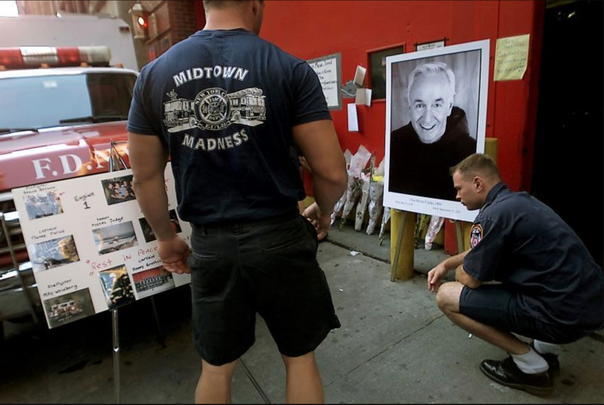 A memorial to Father Mychal Judge set up at his firehouse on Sept 13, 2001. Getty

A screening of the documentary film on Father Mychal Judge and 9/11 is one of the highlighted events in New York on the 21st anniversary of the World Trade Center attacks.

"Remembering Mychal" - Priest of 9/11, directed by Brendan Fay and edited by Ed Caraballo, tells the story of FDNY Chaplain Mychal Judge, who was the first recorded death on 9/11. Twenty-one years after his death he is beloved by many as a saint of 9-11.

On September 11, 2001, as the attacks were unfolding, at the Franciscan friary on West 31st Street Father Mychal Judge, chaplain to the fire department, hurriedly changed from his Franciscan robe into his Fire Department chaplain’s uniform and rushed to help his beloved firefighters.

He was killed in the first collapse. A French camera crew caught the moment seconds before he died, as he prayed fervently for the men around him trying to save lives. He actually died of a heart attack, it was later determined, and became the symbolic first victim of the inferno that day.

“On October 11, 2001, a month after FDNY Chaplain Mychal Judge died on 9-11 in the World Trade Center attacks, friends gathered to grieve, find hope and remember their priest and friend Father Mychal. He had a heart as big as New York,” says Fay.

“In stories, prayer and song, parishioners from New Jersey and New York, recovering alcoholics, firefighters, Franciscans, Irish musicians and the LGBTQ community unwrap the life and heart of Mychal Judge. In tenderness, tears and laughter a compassionate and human Father Mychal emerges, the people’s Mychal Judge.”

Tickets are by donation. Visit Eventbrite to book your place.