The 2017 US Open Golf tournament will be taking part at Erin Hills in Erin, Wisconsin, a place which has a certain Irish feel about it. 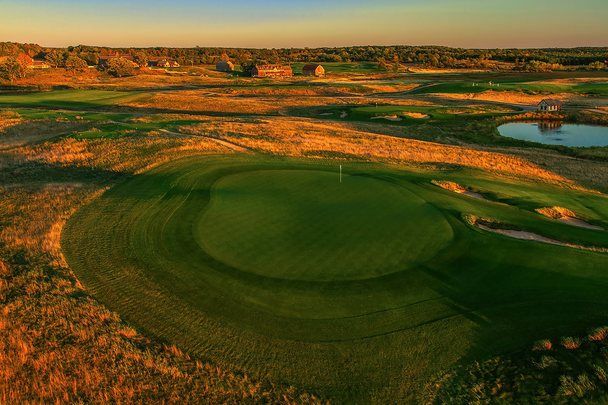 The 2017 US Golf Open will be held at Erin Hills golf course in the town of Erin, Wisconsin. This year marks the 117th US Open Golf tournament to be played since being established in 1895.

Erin is the poetic name for Ireland and the Erin Hill’s course has a very strong Irish feel emanating from it. The club’s logo is emblazoned with a three leaf shamrock, with further shamrock fixtures placed around the course and at every tee box.

The course features an array of picturesque greens to a backdrop of rolling hills that one could mistake for the beautiful southern landscape of Ireland. On site there is an Irish pub and terrace with plenty of Irish flare to make a person feel like they were back in the homeland.

The course was designed by three renowned architects in the golfing world; Dr. Michael Hurdzan, Dana Fry and Ron Whitten. When it first opened in 2006 it wasn’t intended to host the US Open but as the course gradually developed focus shifted.

Over the past number of years the course has hosted the 2008 U.S. Women's Public Links Championship and the 2011 U.S. Amateur Championship. In January 2017, Golf Digest voted Erin Hills the “44th Greatest Course in the USA” out of the 100 greatest courses in the country.

Golf Digest panellists who determined the rewarding of this merit said, “Many courses are architecturally interesting. Many are great tests of championship golf. This course combines the two on a big, bold scale. Lots of interesting choices of biting off corners versus playing it safer.

“It offered a number of challenges for every shot, and each view and look on the course was different from the one before it. It was beautiful with very tough rolling hills that punished the mishit shot.”

As the name suggests the town itself has some significant ties to Ireland. In 1846, Erin was adopted as the name of the town after a suggestion from a man named John Whelan. Whelan was born in the Aran Islands off the coast of Galway in 1814 before moving to the US in 1932 and settling in Boston.

In 1942 Whelan moved his family to what would later be called Erin. Whelan was an active member in the community, becoming the first Superintendent of Schools for the town and later the Chairman.

Within Erin and scattered around its surrounding areas there are many familiar place names like Dublin Drive, Cork Lane, Galway Road and Ireland Drive. With all of these Irish connections being so prominent, Ireland’s golfers will be hoping it will bring them some luck.

Irish golfers like Rory McIlroy, Graeme McDowell and Shane Lowry will be hoping to stake their claim for this major championship when it rolls into Erin Hills. McIlroy and McDowell are both previous winners of the US Open with Lowry looking to go one better than his runner up spot in 2016.

The 2017 US Open Golf Championship will be taking place June 15th to 18th, at the Erin Hills golf course in Erin, Wisconsin.

Will Erin bring our golfers the luck of the Irish this year? Let us know in the comments below.