Star Wars actor will star with Margot Robbie in children's classic, which could see him get an Oscar nod. 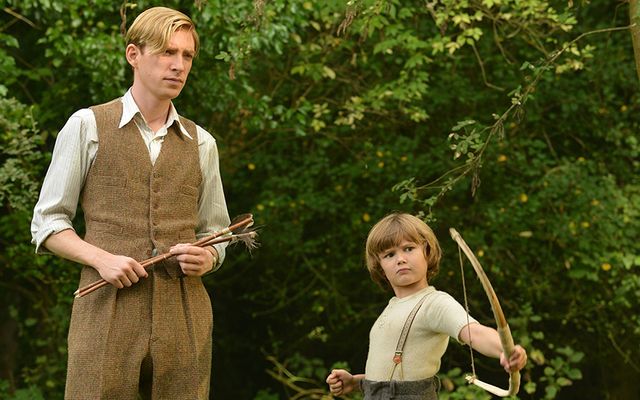 Star Wars actor will star with Margot Robbie in children's classic, which could see him get an Oscar nod

Domhnall Gleeson will hopefully be on Oscar’s radar come October when Goodbye Christopher Robin is released.  Gleeson stars as A.A. Milne, beloved to this day as the author of all the Winnie-the-Pooh books.

Milne was a complicated man, despite the charm that emanated from his works about the beloved teddy bear Winnie and his pal Christopher Robin, who was based on Milne’s real son.

The real A. A. Milne, Christopher Robin and Winne the Pooh.

“I’m interested to see how people will respond to it in America. It was a very different time. Like, people didn’t hug each other. They saw their kids maybe half an hour a day in the evening,” Gleeson told Entertainment Weekly last week.

“The rest of the time, it was the nanny bringing up the kid. And people were not scared of their fathers, but they were certainly an authoritative. And Milne was that.”

An original illustration of Winnie the Pooh and Christopher Robin drawn by E.H Shepard.

It’s going to be a crazy busy end of 2017 for Gleeson, 34, who also stars in Star Wars: The Last Jedi which bows in December. Goodbye Christopher Robin sees him reunite with Margot Robbie – they were last onscreen in 2013’s About Time.  They were careful about making friends with the young actor Will Tilston, who plays Christopher Robin.

“So we had to kind of lay down some pretty strong things at the beginning, and say to Will, ‘Look, it’s going to feel like we’re not friends sometimes during the day… At the end of every day, we’ll be friends again. But sometimes, it’s going to be hard.’ Like, I’ve got to shout at him, and scare him. And he was great, because he was able to do the same thing,” said Gleeson.

“We would give each other time and space before getting ready for scenes. But we played all the time. He’s a really funny kid. We made each other laugh a lot. I’ve probably got the sense of humor of a 10-year-old, so that works out well! Lots of fart jokes.”

Works every time, right! There are trailers all over the ‘net for Goodbye Christopher Robin, and they look great.