“Derry Girls” season three premieres, is there a movie on the cards?

Writer and creator Lisa McGee hinted at the possibility of a "Derry Girls" movie at the series' final season premiere. 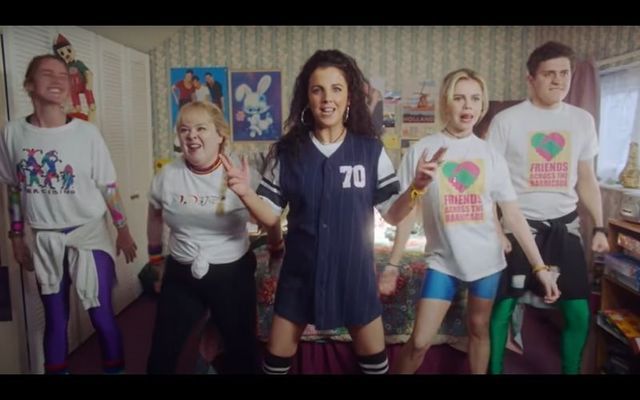 "Derry Girls" is back for its third and final season. CHANNEL 4, YOUTUBE

"Derry Girls" cast and crew appeared on the red carpet ahead of the third season premiere last week in Derry, bidding a final farewell to the beloved show.

Stars Jamie-Lee O'Donnell and Saoirse Monica Jackson attended the premiere, alongside writer and creator Lisa McGee, who hinted at the possibility of a "Derry Girls" movie.

"Who knows what could happen in the 'Derry Girls' universe", said McGee, according to ClassicHits.ie.

"It’s been six years of my life, and I’ve loved it, it’s been very good to me, but we are very tired and need a holiday," she said of the coming-of-age comedy series, which premiered in 2018.

"This has been like saying goodbye, but it’s not often you get to do exactly what you wanted to do."

McGee also spoke of the "Derry Girls" reference in a recent Simpsons episode.

"I was a big Simpsons fan in the 90s, so it blew my mind, I can’t believe that happened", she revealed. "That and the mural (in Derry) were my two moments."

What a fantastic night at the #DerryGirls series 3 premiere🎉. It was lovely to hear from writer @LisaMMcGee & director @carsonlennox talk about their love for the comedy. The new and final series is not to be missed - It’ll be emotional to say goodbye📺. #MadeInNI pic.twitter.com/nCzRONRBPZ

The "Derry Girls" mural, which appeared on the gable wall of Badgers Bar in Derry in 2019, also got an update ahead of the premiere, according to the Belfast Telegraph.

In the update, Michelle, who was holding up two fingers in a peace sign, can now be seen holding up three to signify the third series.

At the premiere, Derry native Jamie-Lee O'Donnell spoke of her pride at playing Michelle in the series..

"The fact that it has been received so well, such an honest portrayal of Derry, is something I’m really proud of,"  she said.

Meanwhile ,Saoirse Monica-Jackson said that her character Erin will stay with her forever.

"It’s incredibly surreal to think this is the final chapter, I was very reflective this morning thinking about my first ever audition for 'Derry Girls' and that moment of meeting the girls for the first time. It feels very full circle now."

"The show is something I’m so incredibly proud of, it’s very humbling and I’m so proud of Lisa".

"I’ll also never have another job where I’m doing a premiere that my whole family can come along to, it’s very special."

The final season of "Derry Girls" premieres on Channel Four on Tuesday, April 12. The series will return to Netflix sometime later this year.