Former UK Media Minister John Whittindale described the series as "distinctively British" on Wednesday as he attempted to bring in legislation requiring new series to adhere to British values. 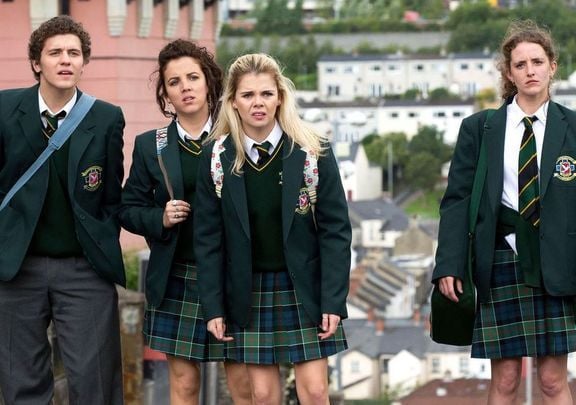 Former Media Minister John Whittingdale made the much-derided comment at the Royal Television Society on Wednesday before he was axed in a Cabinet reshuffle on Thursday.

He proposed that Ofcom, the British Government's regulatory body for broadcasting, did more to ensure that broadcasters produced clearly British programming, using Only Fools and Horses, Fleabag, and Derry Girls as examples.

Whittingdale said that he wanted to introduce a legal requirement to ensure that broadcasters adhered to British values.

"So in our upcoming White Paper I intend to include proposals that will expand the remit of public service broadcasters so that it includes a requirement for them to produce distinctively British content," he told the Royal Television Society on Wednesday.

However, his inclusion of Derry Girls as a "distinctively British" series has sparked indignation on social media.

While the series is produced by British company Hat Trick Productions, it centers on a group of nationalist friends during the Troubles and regularly refers to British occupation in Northern Ireland.

"The most ‘Ach I can’t be dealing with this today’ headline I’ve seen about the show. And there’s been a few," McGee wrote on Twitter.

The most ‘ Ach I can’t be dealing with this today’ headline I’ve seen about the show. And there’s been a few 😂

Siobhán McSweeney, who plays Sister Michael in the popular series, also took to Twitter to respond to Whittingdale's comments.

"Derry Girls is made by a British company and aired by a British channel. But it’s not a “distinctively British” programme. But what would I know?" McSweeney wrote on Twitter.

Derry Girls is made by a British company and aired by a British channel. But it’s not a “distinctively British” programme.
But what would I know ? https://t.co/7h6dQU2nux

Other Twitter users took inspiration from the sitcom to respond to Whittingdale.

One fan of the show tweeted an image of Derry Girls character Michelle alongside her quote: "that's English for you, f**king savages."

Others pointed out that there is a reason that the sitcom is not called "Londonderry Girls".

Whittingdale explained that he believed Derry Girls was a distinctively British series because it "addresses the Troubles and the rise and fall of Take That with equal passion".

"It could only have been made here."