Over 1.6 million tuned in to watch the first episode of a new comedy about Catholic girls growing up in Derry during the Troubles. 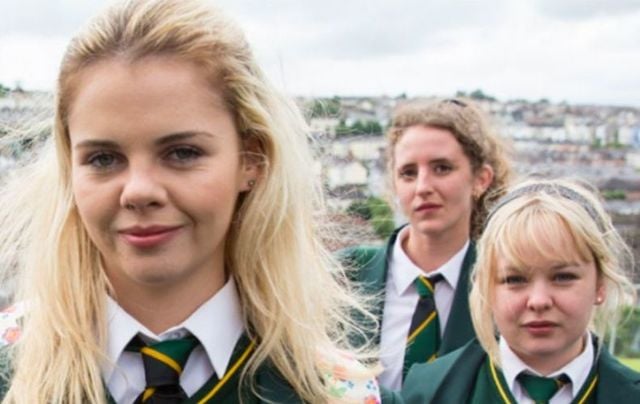 Over 1.6 million tuned in to watch the first episode of a new comedy about Catholic girls growing up in Derry during the Troubles. Channel 4

Heralded as a new 'Father Ted,' 'Derry Girls' combines 90s nostalgia with a dark humor about the Northern Ireland Troubles.

British TV station Channel 4 may have the next new comedy hit on their hands after a massive 1.6 million people tuned in to watch the first episode of the highly anticipated show “Derry Girls.”

The station behind the successful “The Inbetweeners” and Irish classic “Father Ted” has described the reaction to the first episode of the show as “fantastic,” with only a few dissenting voices, mainly complaining about the fact that it refers to Derry instead of Londonderry.

The show follows the story of 16-year-old Erin Quinn, played by Saoirse Monica Jackson, as she and her friends grow up in Derry in 1994. The show mixes depictions of life as a teenage girl in a Catholic school with nostalgia for the 90s. That is combined with a dark take on the Northern Ireland Troubles including references to the IRA, bomb squads and British soldiers appearing on school buses.

The show’s writer, Lisa McGee, based the stories on her own experience of growing up in Derry and we can’t wait to see what else she has in store for us in the rest of the series.

Unashamedly failing to water itself down for an English (and maybe even Republic of Ireland) audience, fans of the show were out in force on social media after its premiere:

Already obsessed with #DerryGirls - anyone who went to a convent school will understand! 🤣

“Ring Bobby Sands”
OMG the one-liners in #DerryGirls are hilarious!
😂😂😂

#DerryGirls mark my words, not only will this get a second series, it’ll provide a much needed tourism boost for the city. Best Irish based comedy since Moone Boy.

"Don't say knickers in front of your father, he can't cope" #DerryGirls 😂😂😂

#DerryGirls was a joy. Humour aside, its charm was in its portrayal of my favourite thing about Derry: a steadfast refusal to let grim circumstances get in the way of the craic. Reminded of my parents' childhood question to their friends: "I'll see you down at the riots?"

Read more: Attempt to have fun with the Irish Famine again with a "funny musical"

People from Derry were also delighted to see their city shown in such a way:

I have been looking forward to #DerryGirls since the first press release. I’m glad female driven comedy from Northern Ireland has finally arrived.

Some watchers were even given a bit of a history lesson about what really used to go on in Northern Ireland in the 90s:

Imagine though going to school and the IRA planting a bomb to murder children on their way to school. Oh wait, they did do that. #DerryGirls

Hopefully the show will officially make its way to the US soon!

Did you tune into “Derry Girls”? What did you make of the show?