Lisa McGee, creator of the hit show "Derry Girls," says she wants to explore bringing Erin and the rest of the "eejits" to the big screen. 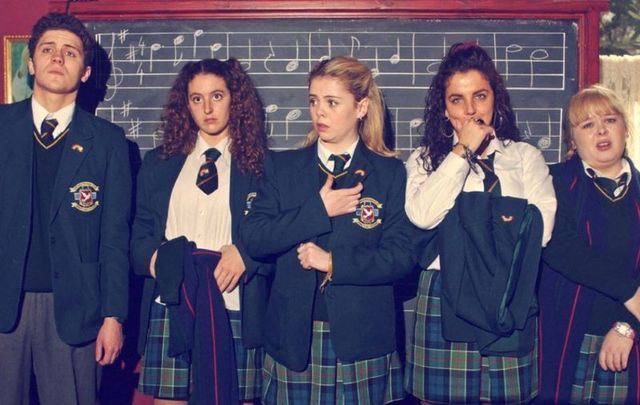 Derry Girls could be heading to the big screen, according to Lisa McGee

“Derry Girls” creator Lisa McGee confirmed that she is indeed interested in writing a film version of her hit television show if and when the story is right.

Speaking with Red Carpet TV, McGee was asked if audiences would ever be able to see the lovable gang of Derry Girls - Erin, Clare, Orla, Michelle, and the ‘wee English fella’ James - “embarrass” themselves on the big screen.

“That’s definitely something that we’re talking about,” McGee confirmed, “and it’s something I’d like to explore.

She added: “It’s just if the story’s right. It’s about me figuring all that out at some point.”

Read More: Lisa McGee: get to know the award-winning creator of Derry Girls

Back in 2018, Irish comedian Tommy Tiernan, who plays the dad Gerry on “Derry Girls,” said: "We finished filming the second series last Friday so that'll go out in March.”

Tiernan, however, did acknowledge that it’s “all up to Lisa (McGee). That's her going away and sitting in a shed in London and just coming up with all the stories.

“She's a genius I think in terms of the amount of stories she's able to fit into each episode and I think it's fantastic.”

McGee went on to shed some light on the highly anticipated third season of “Derry Girls,” saying that there are lots of guest characters scheduled to make appearances.

"In every episode, we have a new big guest star come in,” McGee said. "That's really exciting, writing those. That has been good craic, looking forward to shooting all of that."

“I think because people can recognize themselves; we’ve all been a dick when we were young maybe,” McGee says with a chuckle.

“There’s a fondness for them because they’re so flawed and stupid at times, people recognize themselves in that.”

While the premiere date for "Derry Girls" season three isn't yet confirmed, Nicola Coughlin, who plays Clare on the comedy, tweeted in July that McGee was still writing the new season and that filming likely wouldn’t begin until 2020:

Series 3 is being written as we speak 💖 https://t.co/oqBH6RUuto

No need for a petition we’re filming Derry Girls 3 next year! https://t.co/pmZBTwNR3C

Are you hoping for a "Derry Girls" movie? Let us know in the comments!