Michael and Matthew Gardiner’s #LadJam2 series allows men around the world to express their love of Irish dance. 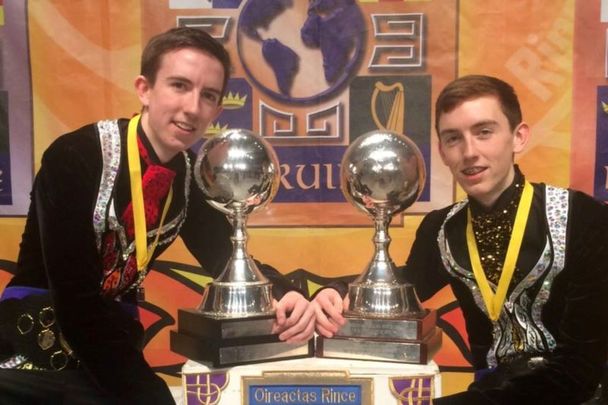 Michael and Matthew Gardiner’s 2019 #LadJam2 series allows men around the world to express their love of Irish dance and the skill, power, and athleticism needed for Ireland’s traditional dance

Michael and Matthew are both multi-world champion award-winning Irish dancers who live in the west of Ireland. They were both born in Denver, Colorado, to Irish parents and later moved to Ireland in 2006. Michael (23) and Matthew (20) both followed their older sister into Irish dancing at the age of four in Denver. Their Irish parents both wanted their kids to experience some sort of the Irish culture, and for the Gardiners, Irish dancing was about to take over their lives.

Now, they both dance all over the world with Riverdance, The Kilfenora Ceili Band, and Fusion Fighters while also balancing their architecture and engineering degrees. Both boys have retired from competitive dancing but are still heavily involved as teachers and choreographers in the Hession School of Irish Dancing, in Galway.

About a month ago, the brothers launched a project they called #LADjam2. The original #LADjam project was created by their good friend and fellow Riverdance colleague James Greenan. The idea behind the original project was to be the first ever internet jamming session. Greenan called for lads all over the world to send in their best beats and he compiled them into one video. Greenan’s project was extremely successful, and he gathered 49 lads from all over the world to be a part of the video.

“Since every good movie deserves a sequel, Matthew and I decided to bring #LADjam back five years on. We wanted to continue what James had started and help to create a platform for lad dancers all over the world to be able to showcase their skill, rhythm, athleticism, and talent. It’s a brilliant way for the lads to express themselves and get creative,” the Gardiner brothers told IrishCentral.

“We know from competing and performing, that the standard of Irish dancing has risen incredibly, even over the last five years since the first #LADjam. We believe that the outside world doesn’t understand the commitment, the blood, the sweat, the tears and the sacrifices that Irish dancers make in order to get to the level that we are all at.”

Not only does the #LADjam project give men an opportunity to show off their talent, but it also lets them express their love for Irish dancing and to show to the world how cool it can be for boy dancers.

Unfortunately, outside of the Irish dancing ‘world’, there are certain stereotypes that come with the sport. The wigs, the dresses, the fake tan, the diamantes are usually what is showcased instead of the rhythm, the skill, the power, the athleticism.

Lads, in particular, get a hard time for this from a young age, whether it be at school or elsewhere.

Michael told IrishCentral “Matthew and I certainly experienced this; it wasn’t aggressive bullying for us, but it was definitely enough to dampen our confidence and make us question why we started Irish dancing.”

“So, as well as being a fun project, the #LADjam projects also serve as a platform for lads all over the world to showcase how cool their talent and their incredible skill actually is. It has now become a true community of lads who all share the same interest, skill, and athleticism.”

He explained “We sent a call to the world of Irish dancing Lads to send us their best stuff and they did not disappoint. We received 92 videos from every continent in the World. We got videos from Ireland, England, Scotland, Wales, Northern Ireland, USA, Canada, Mexico, Colombia, South Africa, Bulgaria, Hungary, Poland, China, Russia, and Australia.

“We got so many entries, that we decided to split the videos into three episodes to share with the world. Each video contains 30 lads and the talent in each video is absolutely mind-blowing. From ages six to forty-four, the lads have done an amazing job in showing their talent.”