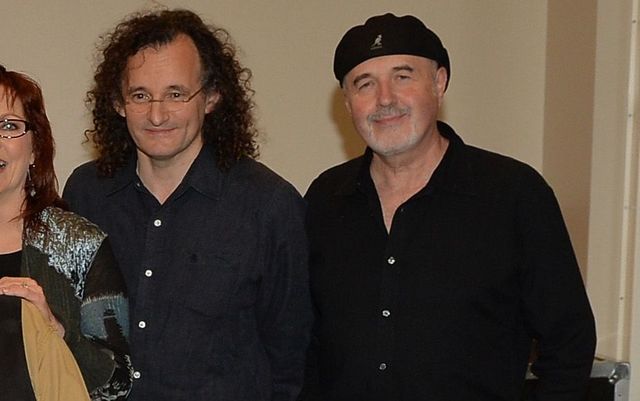 When Chicago musician Jimmy Keane first informed many of us via social media that his long-time friend and fellow Chicagoan Dennis Cahill had passed away on June 20, the message was short but poignant.

Before he took his last breath, Cahill’s wife of 10 years Mary Joyce leaned over and kissed him moments after sharing two tunes from the first Martin Hayes and Cahill album The Lonesome Touch for Green Linnet Records in 1997. The tunes were “The Lament for Limerick” and “My Love is in America.” Fittingly, they conveyed the significance of the moment at hand and an extraordinary life that was drawing to a conclusion.

Dennis Cahill was 68 when complications from a long illness took him away in Chicago in June. Born in Chicago on June 16, 1954, he was raised on the South Side yet was an ardent Cubs fan.

He started playing guitar at the age of nine and would make music his lifelong profession, playing a wide range of genres before becoming one of the most creative and famous guitar players in traditional Irish music. Many of us in the tradosphere were unaware that his early performing career was as a singer/songwriter in the folk/rock scene around Chicago and the Midwest who had a successful partnership with another Clareman, George Casey from West Clare.

Over 35 years ago, his life would take another pathway when he met up with a newly arrived immigrant from Clare, Martin Hayes, who landed in Chicago in the mid-1980s. They played in a Celtic jazz-folk-rock band called Midnight Court in the Chicagoland bar scene and the festival circuit.

Then something clicked between them and Martin coaxed Dennis into trad music as a duo, and there was something very rare yet magical in how the tandem explored time-worn tunes in the traditional canon.

For 30 years, the combination of Hayes on fiddle and Cahill on guitar revolutionized trad music performance as they played all over the world on the finest performing arts center stages, rescued from being trapped in Chicago bars.

Their approach seemed very simple in taking old Irish tune melodies, starting very slowly and then revving up a bit to explore all the nuances that might be gleaned from them while creating a combustible reaction between Hayes’ fiery fiddling playing and Cahill’s spare and spot-on accompaniment fusing unusual chords and rhythm all around the melody.

Siobhan Long in her obituary for Cahill in The Irish Times (June 26) put it succinctly: “Cahill’s minimalism may occasionally have been perceived as simple, but it was never that. Beneath the bare bones of his guitar lines lay the most complex and carefully crafted arrangements. Cahill was never simply an accompanist.”

Irish President Michael D. Higgins, who would have seen the pair perform very often together including at a White House gathering with President Barack Obama, further suggested on reflection on Cahill’s prowess, “Dennis brought a unique and innovative style to his guitar playing while being deeply respectful of the essence of traditional Irish music.”

So many friends and fans of Hayes and Cahill came together online over the past week or so in remembering the quiet and gentle fellow who maintained a great balance between touring around the world with Hayes, and also returning home to Chicago. There were many tales of how welcoming he was at music sessions around town offering help and support to younger musicians and also lending his very attuned ear and production skills for folks who came to his North Side home and recording studio.

Like so many other commentators, I always enjoyed running into Dennis over the years at countless performances and enjoying his great sense of humor and chats about politics or sports. On a couple of occasions, we sojourned as logistical teammates when the Tulla Ceili Band came out on tour in 1997 for their 50th anniversary, and a few years later for Lincoln Center’s Midsummer Night’s Swing dance series. It was great to spend time with him in the quiet hours on the road.

It was also an opportunity to see how closely Cahill had bonded with the Hayes family (father P. Joe Hayes, the leader of the band and Peggy, Martin’s mother, who kept a room for Dennis’ frequent visits to Ireland), and also with the members of the Tulla Band too. The very definition of the hail fellow well met.

It was an enduring musical partnership and friendship between Cahill and Hayes that reflected the gentle and genuine natures of both men. Hayes’ exploration for further musical collaboration professionally allowed for them to continue working together in the massively successful and innovative ensemble the Gloaming, and later the Martin Hayes Quartet with Liz Knowles and Doug Wieselman. Much of that comprehensive legacy can still be discovered on recordings at MartinHayes.com

Hayes penned a very sincere and thoughtful remembrance to his long-time partner while traveling last week which he shared on Facebook, and I will leave the last words here as a testament to that relationship and its impact on the world of traditional music.

“We started on a musical journey many years ago in the bar rooms of Chicago, we didn’t think we’d ever make it out of those bars to the concert stage, but today the president of Ireland and the government minister for the arts were both writing about the huge impact you had on the world of traditional music. You made it out of the bar scene and on to some of the finest stages of the world.

“You really did succeed, you pulled it all together into a most beautiful crystallization of your musical loves and influences. Nobody before you had ever played those chords and rhythms with Irish music in the way you did. You matched the beauty of these traditional Irish melodies with your own equally beautiful sequences of chords and hypnotic rhythms.

“Every night we played, we would give it our all, we’d zig and zag until we locked in. Some of those moments were sublime moments where our connection was truly telepathic.

“There were so many times on stage when you were simply able to read my mind and I hope that you still can…we came from different musical worlds, but together, we made our own world of music and I think we made a difference. I am forever indebted to you and grateful to you for all those magic years of music, friendship and fun.”

Condolences to Cahill’s wife Mary, stepdaughter Clíodhna and his sister Mairéad, and to Martin Hayes and his many close friends all over the world.