P!nk, Alicia Keys, Robbie Williams, Ed Sheeran and Gary Lightbody among stars who paid to Irish musician and his work. 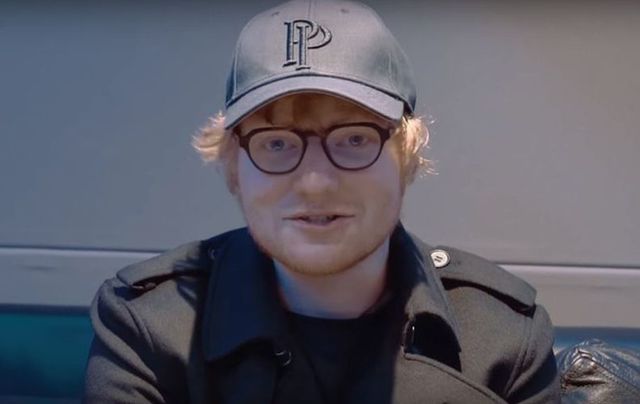 Ed Sheeran among the stars featured in Courtney Cox's surprise video for Johnny McDaid at the Irish Post Awards.

P!nk, Alicia Keys, Robbie Williams, Ed Sheeran and Gary Lightbody among stars who paid to Irish musician and his work

Hollywood actress Courtney Cox created a gorgeous video of love for fiancé Johnny McDaid in a special show reel for The Irish Post Awards, on Thursday night in London.

The highly acclaimed songwriter and Snow Patrol guitarist accepted the award for his Outstanding Contribution to Music at the 40th Annual Irish Post Awards.

In a video praising the Derry native, his partner Courteney Cox rounded up a series of artists he has worked with through the years to describe him in three words. P!nk, Alicia Keys, Robbie Williams, Ed Sheeran and Gary Lightbody are amongst the stars to pay tribute to Johnny McDaid and his work.

Read more: Watch the 40th Irish Post Awards on IrishCentral, all the way from London

The video is truly moving, it must be said.

Robbie Williams said McDaid got him to be 'the most vulnerable.'

"He’s like a musical therapist, he got me to be the most vulnerable that I’ve ever been on any song ever.”

"I just say these terrible things and he turns them into pure poetry," What About Us singer P!nk says."

"He is very giving and is willing to give you as much as you give."

"His contribution over the last two decades to Irish music is immense," bandmate Gary Lightbody said.

Accepting his award, after watching the show reel, he said “I’m absolutely overwhelmed for all those amazing messages, I’m amazed by Courtney going to that effort – thank you darling.”

Courtney Cox and Johnny McDaid on the red carpet at the 40th Irish Post Awards.

Regarding his award, he said “I get to make records for people I love, that’s all I do, that’s all I have to do, be in there and allow that to happen.

“When I was a kid growing up in Derry, music to me was the way forward. It was the way to say we can express this part of us here, our hearts, and do it in a way that allows others to express theirs.

“My mum is here tonight, she is from the bogside in Derry, as is my dad. They spoke their hearts to me and I found music, first of all as a guitar sitting in guitar in corner of my living room now I find it in front of all these people.

Asked what drives him, he said: “Everything that you have seen here tonight is about community, we are all of us a community, we are people from Ireland who left and came here to England to make more of our life.

“We are community - what drives me is exactly that – its community.”

You can watch the full award ceremony below here:

Posted by IrishCentral.com on Thursday, 23 November 2017

Read more about all the winners here