“If it wasn’t for her, I probably wouldn’t be where I am today." 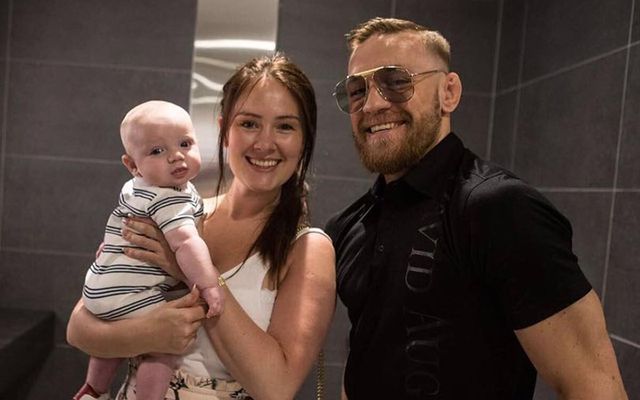 As Conor McGregor prepares for his highly anticipated bout with Floyd Mayweather on Saturday in Las Vegas, boasting that he will take down the undefeated boxer inside two rounds, there is one person behind the scenes who helps keep the MMA fighter grounded.

It seems the 29-year-old “Notorious” would be nothing without his “true secret weapon,” his longtime girlfriend, Dee Devlin.

As McGregor told the Irish Mirror: “If it wasn’t for her, I probably wouldn’t be where I am today.”

“Dee is the quiet force behind Conor,” said the fighter’s tailor and friend, David Heil of California-based menswear brand David August. “He totally respects her.”

Read More: First photo of Conor McGregor Jr with his mom taken by his proud daddy!

Those who know the couple say McGregor is seemingly rudderless without Devlin, who gave birth to their son, Conor Jr, in May.

“I’ve seen him for long periods of time without Dee. And he doesn’t like it. He feels more comfortable and normal when she is there,” UFC President Dana White told the New York Post. “He is like, ‘I need Dee out here.’ She does something that makes him feel better.”

McGregor was on welfare when he met the attractive brunette

The couple met at a Dublin nightclub in 2008. McGregor was only 19 and a nobody at the time — just a working-class boy from the Dublin suburb of Crumlin. When he met the attractive then 20-year-old brunette, McGregor had recently quit his job as a plumber to train in mixed martial arts full time and was collecting social welfare.

Although he was hardly a catch at the time, Devlin said she was instantly attracted to him.

“He’s very funny — he always keeps me entertained and makes me laugh. He was already training when I met him, so I really admired his dedication to that, too.”

Devlin used to support the couple by working as a secretary. Today, McGregor is reportedly worth $35 million and he’s put Devlin on his payroll.

“I love to spoil her. She does not work anymore. I essentially hired her to the business. She works for me now. She collects the checks,” McGregor told MMAFighting.com.

Heil says Devlin is the one who keeps the entire operation running smoothly.

An MMA source added that the 30-year-old Devlin will cook for McGregor’s entire crew and is regarded as a “team mom.”

She’ll prepare McGregor’s meals, drive him to training, and pack his gym. She’ll sometime write messages of inspiration, such as “New Champ,” on his water bottles.

“She takes care of him and makes sure things are set up for him. She makes sure that he’s on time, to the best of her abilities,” said White.

“She tames the beast.”

The couple have been living in a mansion in Las Vegas as McGregor trains at the UFC Performance Institute in preparation for the Mayweather fight.

“So many of these guys leave their families so they don’t have to listen to any s - - t. And they can shut themselves [off] from the outside world,” White said. “[McGregor] doesn’t do that. He wants Dee to be near him.”

The couple only have eyes for each other says one Las Vegas source.

“I walked right into his dressing room just to find him almost completely naked, getting a massage. His girlfriend was right by him with a bunch of his agents and publicists. It was a sight to be seen — a masseuse was rubbing his thighs while he was chitchatting with his girlfriend. They were pretty lovey-dovey together.”

Heil told the NY Post that despite the couple’s tremendous wealth, the two are really quite laid-back.

“They like the high life, but Conor’s really a normal guy. I call him a secret agent. I know Conor and I know ‘the other Conor,’ ” the tailor said. “He plays it so well. [He and Dee] have this public persona. It’s flashy, but Dee brings a sense of calm to the relationship. It’s a unique situation.”

White agrees: “When you have this type of meteoric rise with the money and the fame and all of the stuff that comes with it, there has to be something normal in your life. That’s what Dee does [for McGregor].

“Someone who will believe in your dream with you is special. There is no doubt whatsoever that she is his soulmate.”