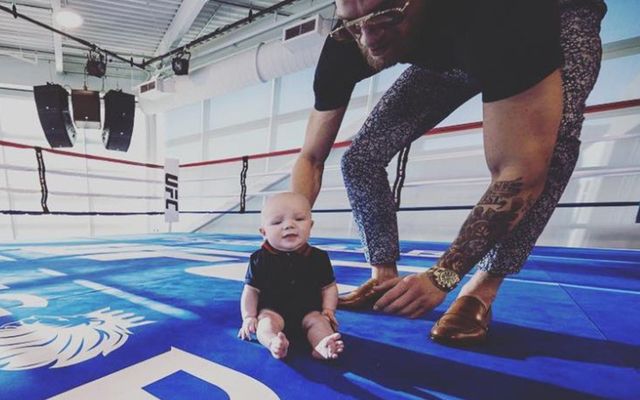 Conor McGregor Jr and his Dad take to the boxing ring in Los Vegas. Instagram / @thenotoriousmma

Win, lose or draw his mega-fight against Floyd Mayweather in Vegas on August 26, Conor McGregor will always have his little mini-me to cuddle up to.

Conor McGregor Junior has been hangin’ with dad and mom Dee Devlin in Sin City leading up to the bout that all the world is talking about. The pint-sized Mac, just over three months old, is a real cutie, and he’s got a mean little jab going already.

Daddy McGregor posted a video of bonding time with his boy last week, which consisted of the two watching old boxing matches together.  The tyke was pretty animated watching the action, which thrilled his pop to no end.

“He’s been a great motivation this camp,” McGregor told the media at an open workout last Friday.  “I’m in awe of my little boy. I’m in awe of him. Comparing images to the other day, and he looks exactly like me. I’m very happy about that.”

Mom Dee, Conor’s long-time partner, is certainly no slouch in the looks department, though there’s no question that the little guy definitely has the McGregor genes.

Father and son will be all about the fight game as time progresses. Conor told ESPN that he plans to have his boy schooled in “combat” sports as soon as possible. He also looks forward to telling Conor Junior all about his career as the UFC’s most famous and accomplished fighter.

“That’s one of the things I look forward to the most,” McGregor said last week. “To show him back my whole career, this crazy journey I’ve been on. And to show him all the hard work and sacrifice that I’ve put into this. He will come up surrounded by many luxuries, but he will always know that it’s hard work that achieves this. In order to achieve great things in this life you must work hard, and that’s the message I will give my son.”