Conor McGregor's fight record: How many times has he won and lost?

Can McGregor's impressive MMA skills translate to boxing when he takes on Floyd Mayweather? 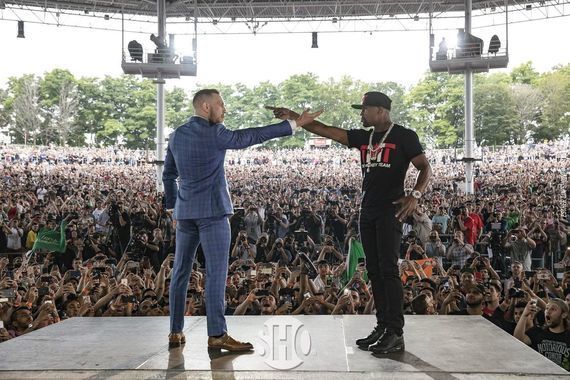 The talking is over between McGregor and Mayweather, it's time to fight Showtime

Conor McGregor will face off against Floyd Mayweather on August 26 at the T-Mobile Arena in Las Vegas. The fight is being dubbed ‘The Money Fight’ and is expected to be the largest financially grossing boxing match up of all time. It is easy to forget that McGregor has never actually boxed competitively in his career.

McGregor has amassed an impressive 21-3 record throughout his mixed martial arts (MMA) career claiming four world titles in the process. However, on August 26 he will enter the confines of a boxing ring with a 0-0 record against the man whom many believe to be one of the greatest of all time, Floyd Mayweather.

Of McGregor’s 21 career victories he has won 17 of his fights by way of strikes which is quite impressive. However when the manner in which these fights ended is factored in it shows that only three of these wins were by KO due to standing strikes while McGregor earned one of his victories due to elbows with the rest coming by way of ground and pound.

'Mystic Mac's' biggest advantage for this fight may be his left hand, which many experts believe is significant noting Mayweather’s previous difficulties with southpaw boxers. McGregor has landed an average of 5.82 strikes per minute in his career amounting to a 47% striking accuracy.

If McGregor is to be able to achieve the impossible he will need to do so without the weapons which have helped him during his entire MMA career, namely elbows, kicks and grappling. McGregor has used these weapons to set up boxing strikes and finish opponents in the past but he will need to rely on sheer boxing skill in order to gain the victory on this occasion.

One of the major obstacles that McGregor will have to overcome and adjust to if he is to get the finish in the fight is the fact that he will not be able to use ground and pound which has clearly been a major advantage throughout his career thus far. Boxers are given an opportunity of 10 seconds to recover from a knockdown, something MMA fighters don’t have.

McGregor himself has never been finished due to strikes, with all three of his losses coming by way of submission, which is one thing he will certainly not need to worry about. Another obstacle which McGregor may need to overcome is the length of the fight. The Dublin native has only ever gone the distance twice in his career which were 15 and 25 minutes in length, winning both.

McGregor is focused on getting the stoppage victory over Mayweather

Against Mayweather, who has gone the distance 23 times in his career (nine times in his last 10 fights), McGregor will need to be able to fight for 36 minutes if the fight goes the full 12 rounds. Conditioning has been a factor before for McGregor which many contribute to his submission loss against Nate Diaz in March 2016 and their subsequent rematch, which should be noted was fought at a higher weight than this match up.

The Notorious one is trying to achieve something no one has been able to do during Mayweather’s glittering professional boxing career and beat the pound for pound best known simply as ‘Money’. Mayweather has never been knocked down or finished in his career and is on the cusp of becoming the only professional boxer to ever go 50-0 in their career.

Someones ‘0’ will have to go, can McGregor silence the critics and earn the ‘W’?