Conor McGregor’s son Conor Jr. enjoyed his christening over the weekend and the pictures from “Mac Land” look incredible. 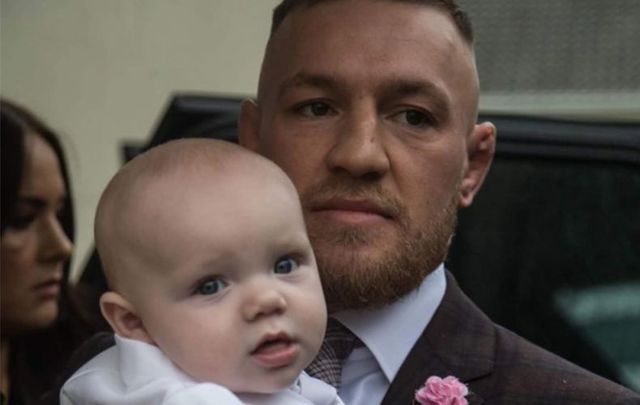 UFC fighter McGregor shared some pics of the day showing him alongside Devlin, his partner of nine years, as they celebrated the special day with a petting zoo and a Ferris wheel, among many other wondrous fairground rides and games.

The 29-year-old Dubliner sported a brown suit with a pink pocket square and flower as he enjoyed the memorable christening party for his five-month-old son.

In the post which McGregor captioned "Conor Jr’s Christening!", McGregor  also tagged fashion brand “August McGregor,” which is believed to be his own line of clothes set for release early in 2018.

In addition to launching his own menswear collection, the UFC star is eagerly awaiting the premiere of his own documentary “Conor McGregor: Notorious,” set to be released next month.

Tracking McGregor's rise from his time living in his mom’s spare room with Devlin to earning millions for a fight, the movie spans more than four years, capturing all of the fighter’s personal and professional highs and lows, right up to his loss in his first professional boxing match against Floyd Mayweather last August.

A great day for my little man! #Blessed @ginger_beard_photos

The documentary was announced by Universal not long after the Crumlin native's defeat by Mayweather and will be released in Ireland and the UK on Nov 1 and in America and Canada on Nov 8. The documentary is also believed to focus on the fighter’s relationship with Dee Devlin, the girlfriend who has been with McGregor from his time on the unemployment line to today.

If the trailer is anything to go by we can also expect a lot of talk about being Irish means to McGregor and how that inspires the man known for walking out to the cage to the sounds of the Irish song “The Foggy Dew.”

Arnold Schwarzenegger and UFC President Dana White are among those who provide insights into the preparation before the fight with Mayweather.

Would you buy from Conor McGregor’s fashion line? Are you looking forward to his movie? Let us know in the comments section, below.