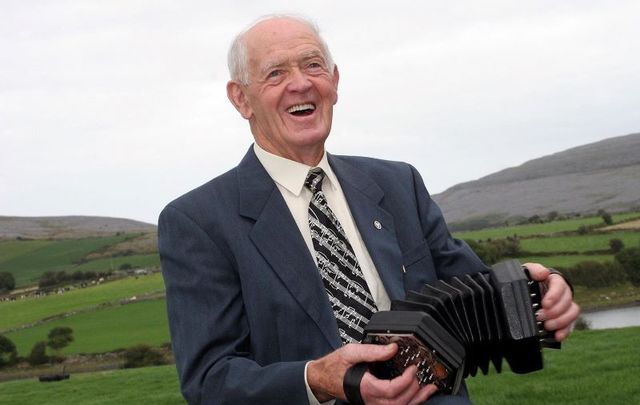 Remembering Irish trad musician Chris Droney, who passed away on September 9 at the age of 95.

“And down from Bellharbour Chris Droney he came.
He played on a matchbox I thought twas that same.
Till someone said 'Robbie what’s that you are saying.'
Isn’t that his own small concertina.”

-Fleadh Down in Ennis Song, by Robbie McMahon

Chris Droney began an exceptional run of All-Ireland solo championships on the concertina at the first Fleadh Cheoil na hEireann in Ennis in that fabled year of 1956 chronicled in the great Robbie McMahon ballad. It would lead to nine solo titles and one duet title with Gus Tierney from Kilfenora up to 1970.

You might think that 1956 was an All-Ireland debut for the North Clare man, but two years earlier in 1954, he appeared on an RTE radio program from his Bellharbour home with his father Jim in a recording captured by the pioneering broadcaster Ciaran Mac Mathuna.

The nation discovered then that three generations of Droneys played the concertina going back to Chris Droney’s grandfather Michael who was born in 1829. And the legend was only beginning to grow surrounding one of Ireland’s seminal traditional musicians and families.

The rugged hills of the Burren and the flaggy shores of North Clare provided the boundaries of the Droney family farm not far from Ballyvaughan. Farming was hard work in such an isolated environment which required discipline daily, but it also afforded the opportunity to learn and play music as a family inheritance.

Chris Droney’s father wanted the same advantage as he had and purchased a concertina for the price of a bullock after Chris started lessons at the age of eight. In rural Co. Clare, house dances provided entertainment and musical education and concertina players were especially welcome, but only if they could play with lift and rhythm for the set dancers.

There were traits Chris mastered all his life as he brought distinction to the humble box long associated with the Banner County, but his charmed life came to an end three months shy of his 96th birthday on Wednesday, September 9 after suffering a severe stroke a few days earlier.

My father, Chris Droney, passed away peacefully last night after 95 happy years. His life filled with family, farming, music and craic. He was the boss to the end. We will miss him greatly. pic.twitter.com/D1yFxDkbuQ

Droney’s storied life and musicianship were admired everywhere traditional music was played but especially in Co. Clare, where 88 years of playing made him the dean of Clare musicians and concertina players. His lively and steady playing was admired and documented over four albums from 1962 to 2005 which reflected his earthly pride of place alongside the Burren.

Dancers delighted to his music in the Bellharbour Ceili Band, Ballinakill, Aughrim Slopes, Kincora, Kilfenora, and lastly the Four Courts Ceili -- the last two were bands that I enjoyed dancing sets with him on stage.  It was a personal privilege to invite him to the Catskills Irish Arts Week in East Durham, New York in 2006 and 2007.

Along with the All-Ireland awards, he was Clare Person of the Year in 2012 in Dublin, a TG4 Gradam Saoil winner in 2014, and in 2018 the MORglor recipient given to special people who contribute so much to the Banner County and exhibit the selfless dedication associated with Muiris O Rochain, founder of the Willie Clancy Summer School.

While his musical prowess was unquestioned, Droney’s character was well-forged in his Burren home, Bellharbour House, throughout his life in his faith, his work ethic, and devotion to his own family.  Married for 62 years to Margaret Cusack from Poulnagun between Doolin and Lisdoonvarna, their union produced seven children and 20 grandchildren and three great-grandchildren who were all the pride and joy of an Irishman who was very content with his life and accomplishments in every way.  The limelight sought him, and his gracious personality was fueled by a great sense of humor which never failed him.

The pandemic restrictions for his wake and funeral would limit the crowds who could attend them last Friday and Saturday. Many lined the roadside as the remains were brought to St. Patrick’s Church in New Quay for a Mass of Christian Burial in which the whole family participated in some fashion. Francis, a concertina player also and his wife Aine McGrath opened with a pair of reels that won Chris and Gus Tierney their All-Ireland title symbolically.

Some of the grandchildren brought up gifts as granddaughter Doireann Garrihy described them that reflected Chris’s life, such as a hurley, concertina, car keys, Pioneer pin, family photo, his MORglor Award, and a model thrashing machine built by his brother John who along with Frank are the two remaining brothers of four who immigrated to Hartford, Connecticut many years ago from Bellharbour. (They were unable to attend because their nephew Jim Droney was also laid to rest in Connecticut that week, and with the travel restrictions).

Later in a personal eulogy after Communion delivered by the oldest son Jim, Droney’s exploits on the thrashing machine up and down North Clare were shared with those in the church or watching online (available online here for a limited time).  Aoibhin Garrihy Burke delivered a personal poem she composed that encapsulated the close caring relationship Chris had with all his grandchildren and the outstanding legacy they inherited.

Needless to say, for those in the church or watching online, the music was tailored perfectly for the man who was always careful about his appearance, with Francis, Aine, and Ann Kirrane leading the way. Daughter Ann, also an outstanding concertina player with a heavenly voice, sang “At the End of the Day” during the Mass accompanied by her daughter Aine, and later appropriately “Peaceful Corcomroe,” an air that Chris composed both the tune and lyrics which Ann sang on a recently released recording accompanied by Garry O'Briain.

And a number of grandchildren played, including a fifth generation of Droneys, on the concertina in Cathal and Ciara.

As the family left the church, a large group of musicians led by the Kilfenora Ceili Band played the tune always associated with Chris, “The Bellharbour Reel,” with vigor and respect for their cherished companion. At the graveside at Corcomroe Cemetery nearby, a music friend of 50 years, Antoin MacGabhann, played his own air “When Days End Is Done,” signifying that the chores are all done, and it is time to rest.

As Jim Droney reflected in his eulogy, when you are speaking about a person who has lived almost 96 years, it is really a celebration of their life rather than a sorrowful parting.

I am incredibly grateful to have known Chris Droney and to have worked with him over the years and to spend time in his company. And I pass along my deepest condolences to his wife Margaret and children, James, Ann, Clare, Francis, Declan, Joseph and Caroline, and their families.