You win some, you lose some, and Conor McGregor lost thoroughly last weekend in his UFC comeback bout against Dustin Poirier, who floored him in the second round. 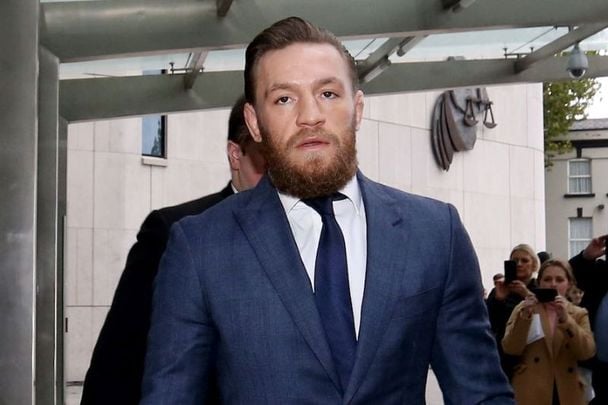 Conor McGregor photographed outside Criminal Courts of Justice in Dublin in November 2019. RollingNews.ie

Conor McGregor pulled up to Fight Island in Abu Dhabi in his mega yacht, promising to paint a masterpiece in the octagon, and left on crutches eating humble pie.  To his credit, he took his defeat like a man, and his celeb fans are eager for his comeback.

Long time Conor pal Justin Bieber shared a photo on Instagram of Conor holding the Tricolor with the caption, “Love this guy win or lose.”  More than two million of his 160 million followers agreed.

Even Congresswoman Ilhan Omar, squad member from Minnesota, got in on the act and surprised her followers with her take on the fight.

“Connor (sic) was saying he was gonna k/o Dustin first round and he couldn’t even last … such an unexpected fight,” she tweeted.

When someone asked her why she likes McGregor she replied, “Who told you I like Conor,” with an exasperated looking emoji.

Boxing king Floyd Mayweather, who beat Conor in a 2018 match, showed no mercy to his old rival, calling him “Con Artist McLoser.”

"Just know, that bum will never be me or be on my level. I’m just built different, my mindset is on another planet, my skills are second to none, I’m a natural-born winner and yes I talk a lot of trash, but every time I back it up!” Floyd added.

Conor himself might get a laugh out of the memes of him and Senator Bernie Sanders, who went viral after a photo of him with his cute mittens at the Biden inauguration made the rounds.

Life goes on, as Conor showed on Monday when he posted a photo of himself and his son Conor Junior behind the wheels of two diggers, shoveling sand in Abu Dhabi. “Back on the sites, it happens the best of us. We’ll build it back!” he wrote.