“You start thinking what was wrong,” she says. 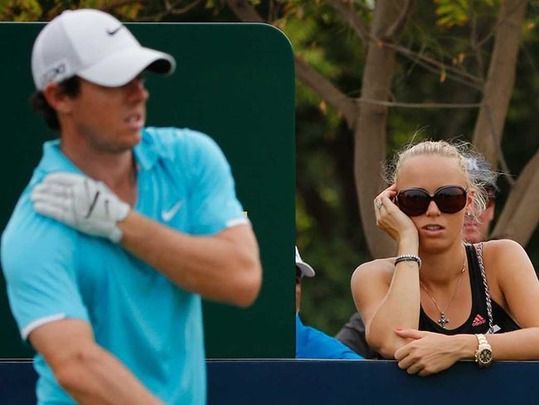 Tennis star Caroline Wozniacki has come clean about the sudden end to her three-year relationship with Rory McIlroy. Just over three months ago, the golf star phoned his then-fiancee and, during the brief conversation, called off the wedding.

“When it comes out of the blue,” Wozniacki told the New York Times, “that’s like a shock. It’s like someone dies right in front of you.”

“You start thinking what was wrong?” she said. “What went wrong?”

The breakup of the high profile sports couple attracted a lot of media attention, but Wozniacki says she is ready to move on.

“I don’t want to have my name stuck with him forever,” she said. “I’m my own person. I have my own career. The years we had together were great, and unfortunately, things had to end like they did.”

She added: “I know what I want out of a relationship in the future and what I don’t want. I’m happy being single right now.”

The 24-year-old has decided to focus on her family, friends and sports career.

Wozniacki plans to participate in the New York City Marathon for charity in November, the month her wedding to McIlroy was to be held.

“I think at this point for Caroline, she’s looking for some distractions, some challenges, new things in her life now,” Chris Evert said of the young tennis player during a recent ESPN telecast. “She’s had a tough year emotionally.”

Serena Williams, who has described Wozniacki as “honorable and kind and has a really good heart,” has said it was notable how her friend would not say a bad word about McIlroy after the breakup.

“I was like: ‘How can you be so nice?’ ” Williams said. “She said: ‘I could never hate him. He’s been a big part of my life and even if I wanted to, I couldn’t hate him.’ I was really influenced by that.”

However, Wozniacki does not keep in touch with her ex.

“I don’t believe in holding onto someone who doesn’t want to be with you,” she said. “I definitely want someone who just wants you for who you are. I’m very upfront. I’m very honest and I’m very straightforward and I think some people get intimidated by that. I’m not saying Rory did...”

She added: “In general, a lot of people do, and if I’m in a relationship that’s strong, I’m the person I am and that’s exactly what you get.”