Bono honored with Woman of the Year award

The U2 frontman acknowledges it as “a bit ridiculous” for him to be honored at the Glamour Women of the Year awards. 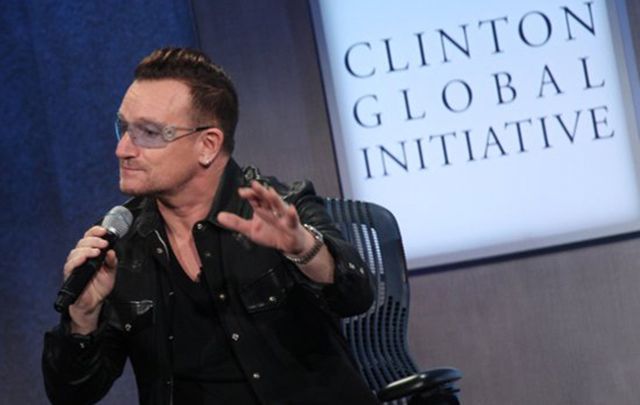 Bono accepting his Women of the Year award. Glamour

The awards ceremony is commonly known for honoring the year’s most impressive women who this year included the likes of Olympic gymnast Simone Biles and International Monetary Fund director Christine Lagarde.

The U2 frontman became the target of much anger and confusion online, however, when he was announced as an honoree by the magazine last month.

Glamour defended its decision, despite the controversy, citing Bono’s efforts to combat sexism and to promote gender equality through his charity work.

The Irish rock star confronted the controversy head on during his acceptance speech at the event in Los Angeles on Monday evening. During the speech, he acknowledged it as being a “bit ridiculous” for him to receive a “Women of the Year” award, reading out several of the meaner tweets sent in his direction from unhappy Twitter users.

The Irish singer also spoke to more serious matters, however, including a direct address to President-elect Donald Trump in which he called on the man set to be the 45th President of the United States to look to women, putting equality at the forefront of his presidency.

"So, I say to the president-elect: Look across to women. Make equality a priority. It is the only way forward. The train is leaving the station. Be on it or be under it," Bono warned.

First Bono wins Woman of the Year and now a rock wins Sexiest Man Alive. Everything is shit.

Look, everything feels crazy right now, but at least the woman of the year is still BONO

"There is nowhere on Earth women have the same opportunity as men...And unless we address this problem — both men and women together — our world will continue down this misogynistic, violent and impoverished path," he stated, speaking further on the problem with sexism worldwide and on the efforts his ONE campaign have made to achieve gender equality.

Bono mentioned, in particular, the role that men played in creating sexism and how it was also their job to help in dismantling it.

“I’ll tell you that the real reason that I’m here is because one of the—really one of the tiny few awards that caused real excitement in our house and actually stopped the usual dinner conversation and started what my daughters think of as the only conversation—about there being 130 million girls that are not going to school, a conversation where right here in the United States of America, women make 80 cents to a man’s dollar,” he said.

“The sexism is embarrassing in a rock and roll band, but in certain places in the world, sexism is a killer, and you know, as the ONE Campaign that you hear about in the video with Sheryl Sandberg, says, poverty is sexist. Poverty is worse for women and girls. It denies them the essentials like human rights and health, but it also denies them a way out through education and opportunity. They can work the land, but they can’t own it. They can earn the money, but they can’t bank it.”

Bono gets "woman of the year" award. So 2016 is the year women can't win anything, including their *own* award.

After the initial insult, isn't the real question & true testament of his integrity whether Bono will *accept* the Woman Of The Year award?

He was introduced to the stage by Amy Poehler who spoke of Bono as a man she could tell her two young sons to look up to, comparing him to the supermoon - light in the darkness.