The stamps were revealed in advance of the 94th Academy Awards, which take place on Sunday, March 27, at the Dolby Theatre in Hollywood. 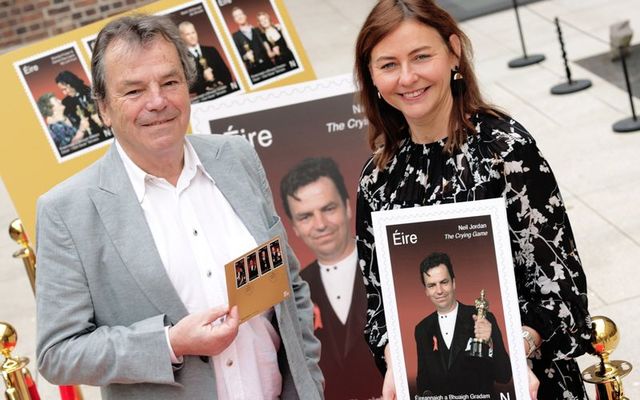 An Post has launched new stamps celebrating the achievements of Ireland's Academy Award winners over the last 30 years.

The stamps, designed by Dublin Studio Red&Grey, were revealed in advance of the 94th Academy Awards ceremony, which takes place on Sunday, March 27, at the Dolby Theatre in Hollywood.

The booklet of four ‘N’ stamps, which cover standard letter postage within the island of Ireland, celebrate Irish success at the Oscars and feature photographs of the moment when each of the winners picked up their Oscar at the famous awards ceremony.

In 1990, Daniel Day-Lewis and Brenda Fricker were the winners of Best Actor and Best Supporting Actress for "My Left Foot."

Neil Jordan won Best Screenplay for "The Crying Game" in 1993.

In 2008, Glen Hansard and Markéta Irglová were the winners for Best Original Song in "Once."

Neil Jordan, speaking at the unveiling of the Irish Oscar Winner stamps,  said ‘"I never thought that I would win an Oscar, but I never ever thought I would be on an Irish stamp. What a privilege.”

Debbie Byrne, Managing Director of An Post Retail, said: “At An Post, we’re committed to showcasing and supporting the best of Irish culture and talent. The Irish Oscar Winners stamps celebrate the best in the business and serve as a reminder of what we, as Irish people, can achieve.

"This special issue is being released just in time for the 94th Academy Awards ceremony and we wish all of our Irish talent the very best of luck this weekend.”

This year's Oscar contenders include Kenneth Branagh's "Belfast," which has been nominated in seven categories including Best Picture and Best Director, and Northern Irish actor Ciarán Hinds, who was nominated in the Best Supporting Actor category for his role in the film.

Kerry-born Jessie Buckley has also been nominated in the Best Supporting Actress category for her role in "The Lost Daughter."

The 4-stamp Oscars® stamp booklet (€5) is available at main post offices or online at anpost.com/Oscars.